“How Do You Find Yourself, Love?” by BONZIE

BONZIE has shared a live video for “How Do You Find Yourself, Love?”. The track is from her recently released double single, which also includes the instrumental B-side “Back to an Insurmountable wall”.

With her new release “How Do You Find Yourself, Love?”, BONZIE brings her philosophical musings to a post-rock backdrop both gloriously chaotic and stunningly lucid. Recorded by Steve Albini (Nirvana, PJ Harvey), the abrasive yet graceful title track from BONZIE’s latest double single mines much inspiration from Renaissance-era author Thomas More. “The song is something of a meditation on meditation,” explains Nina Ferraro, a 21-year-old songwriter/multi-instrumentalist who’s created under the moniker of BONZIE since age 17. “I wrote it while reading a lot about the connectedness between the human body and the mind, and about how who you are as a person can be influenced by so many different things.”

How Do You Find Yourself, Love? serves as a companion piece to its fellow double single, As the Surface Rose. While the raw urgency of How Do You Find Yourself, Love? starkly contrasts its predecessor’s electronically sculpted textures, both releases chart similar thematic terrain. “The lyric ‘Who am I?’ comes up in each song, and they each have a different take on what that could mean,” Ferraro points out. But despite their distinct sonic environments, she continues, the two releases ultimately form a unified statement. “How Do You Find Yourself, Love? is very much rooted in the moment, whereas As the Surface Rose is more removed from reality,” Ferraro notes. “They’re opposites in many ways, but I think that reflects how we don’t live only in physicality or only in consciousness—at some point those two sides have to join together.”

On “How Do You Find Yourself, Love?”, that sense of physicality manifests in the crushing drum work and heavy guitar riffs that thrillingly clash with Ferraro’s intensely charged vocals. “The way the instruments are recorded, you can really feel their mass and the space they inhabit: you can hear the size of the drums and the body of the guitar,” says Ferraro. That visceral power also infuses instrumental B-side “Back to an Insurmountable wall,” a hypnotically shape-shifting track, produced and performed by Ferraro herself, recorded with Tortoise member John McEntire (who’s previously worked with artists like Broken Social Scene and Stereolab).

In the back-to-back releases of As the Surface Rose and How Do You Find Yourself, Love?, BONZIE shows a multidimensionality that’s long been central to her music. After teaching herself to play guitar at age nine and becoming a fixture on Chicago’s club circuit by her mid-teens, the Chicago-based artist self-released her 2013 debut album to acclaim from the likes of Vogue, Paste, and Spin (who praised lead single “Data Blockers” for its “narrow vocals, wordless refrains, and furious chords”). The following year, she captivated audiences with a highly lauded performance at SXSW, further establishing herself as a mesmerizing live act. “Delicacy and drama, surrender and anger, made a riveting combination when BONZIE performed,” wrote chief popular-music critic Jon Pareles in the New York Times.

BONZIE is now set to release her second full-length, the eagerly anticipated Zone on Nine. Due out in early 2017, the album was fully written and produced by Ferraro herself, and co-produced along with Jonathan Wilson (Father John Misty, Conor Oberst) and Ali Chant (Perfume Genius, Youth Lagoon). 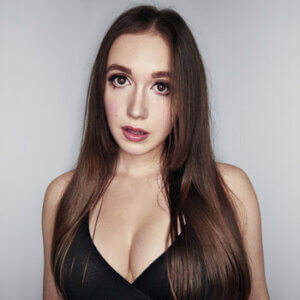