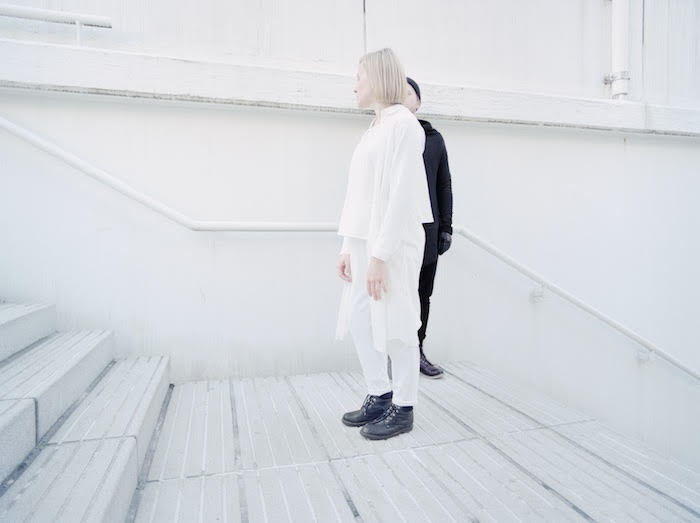 Finland’s Femme En Fourrure (translated as ‘woman in fur’) straddle the line between being artfully risqué and cannily club-baiting. The hook-driven Helsinki duo, comprised of Sandra Tervonen and Juuso Malin flippantly say on their Facebook that their music is ‘made for DJs and catwalks; also: for nightly promenades and oceanside sexin’. In their playfulness they’ve manage to hit the figurative nail on its head: Femme En Fourrure are provocateurs and fashionistas operating on the dark side of the pop spectrum.

New single “Seer” continues their techno-influenced work they’ve laid down already through key releases like their dark 2013 debut 36-26-36, (released on Convex Industries), and their standalone EPs Smell and The Beach. Released on their own label FEF Corp., the A-side features pulsating sidechained bass and a Björk flavoured vocal from Sandra. The suspended intro gives way to quicksand sliding bass and rollicking kick drums.

The flip side ‘Eaten (with Stiletti-Ana)’ sounds like something straight from Grimes’ Visions. Built around a looping synth line that’s modulated to induce hedonistic feelings of euphoria, it sees Femme En Fourrure at once propelled along by a love of the immediacy of a beefy hook yet lost in hazy synthetic abandon if they ever catch themselves being too safe. Like the A-side it’s an exemplary display of mid-tempo electro – proving that when you slow dance music down a notch you can often serve up something more beguiling altogether.

Since they started in 2008 Femme En Fourrure have They’ve played a handful of festivals, including a Boiler Room set in their native city’s Flow Festival. They’ve also worked with a wide range of artist and labels, such as Hotflush’s South London Ordnance. Their collaboration ‘Obsidian’ caught the attention of Marcel Dettmann ending up in his Berlin Session for Red Bull Music Academy and they’ve remixed for the legendary Chicago based record label Trax Records. “Seer/Eaten” is released on April 15th by FEF Corp.