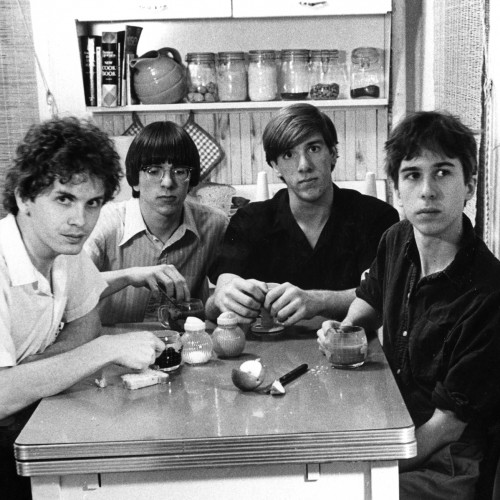 New Jersey-based avant-pop pioneers the Feelies will be performing a pair of 40th Anniversary Celebration shows at The Woodlands in Maplewood, New Jersey on Friday and Saturday June 10 and 11. Both shows will see the band joined onstage by friends and very special guests. The presenter of these concerts is the non-profit organization Rent Party

Started in 2009, Rent Party is a once-a-month live music event at The Woodlands. The proceeds from these shows help fight hunger in our community. Rent Party supports three local food pantries. They built and maintain a large community garden on the front lawn of the South Orange Elks that raises fresh produce for the pantries they support. Rent Party’s BackPack Pals program provides a weekend’s worth of nutritious food to about 100 food-insecure kids in our schools.

Bar/None Records is re-releasing the band’s third and fourth albums, Only Life and Time for a Witness. Both albums are being issued March 11. As a special Record Store Day (April 16) release Bar None/Coyote Records will co-release the Feelies Uncovered. This will be a limited edition 12 ” EP featuring studio recordings of four cover songs, none commercially available before: “Seven Days” (Bob Dylan), “Take It As It Comes” (The Doors), “Dancing Barefoot” (Patti Smith), and “Bar Stool Blues” (Neil Young). In addition, the Feelies recently wrapped up work on a brand new studio album, expected to be released later this year.

Formed in Haledon NJ in 1976, The Feelies released 4 albums- including their influential debut Crazy Rhythms. Supporting the release of their first four albums the band appeared on the The Late Show With David Letterman and in concerts with The Patti Smith Group, REM, and Bob Dylan as well as touring with Lou Reed. The twin-guitar attack of songwriters and founders Glenn Mercer and Bill Million is the infectious sound of the group. Paired with driving drums and percussion, it has left an indelible mark on the landscape of rock and roll.

In 2008, the Feelies re-united to open for long time admirers Sonic Youth at Battery Park and then resurrected their tradition of playing low key gigs at strategic intervals throughout the year rather than doing lengthy tours. In 2009 Bar/None re-issued Crazy Rhythms and The Good Earth, this being the first band-sanctioned CD release of the former. In 2011, they released a new studio album Here Before. They continue to regularly perform live. Their music has been featured in the films Married to the Mob, Something Wild, Prelude to a Kiss, The Truth About Charlie, The Squid & the Whale and Ricki and the Flash.

Originally released in 1988, Only Life is their third album and the first that received major label promotional support. It was produced by Steve Rinkoff, Bill Million & Glenn Mercer with basic tracking done at the Powerstation in NYC and additional recording done at Mixolydian Studios in Boonton, NJ. The album includes classic originals like “Deep Fascination” and “The Undertow”. A cover of the Velvet Underground’s “What Goes On” made Lou Reed take notice and he chose them as touring partners, sometimes joining them onstage for encores. The re-issue features a bonus download card giving access to a new acoustic version of “It’s Only Life” with live tracks from their last show at Maxwell’s in Hoboken NJ before the venue was shuttered. It features liner notes by novelist Rick Moody (The Ice Storm, Garden State).