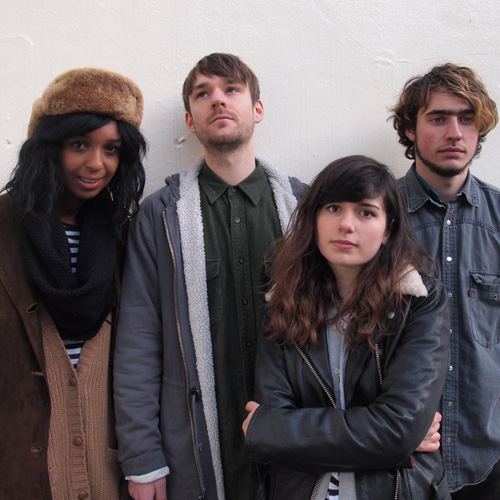 Brighton based Fear of Men is set to release a compilation of singles on marbled vinyl 12” and as a digital set under the title “Early Fragments” on February 12, 2013 via Brooklyn based indie Kanine Records. To date, Fear of Men has released singles on various UK labels, and they are excited to have their first release in the US, to be followed by their first live appearances (including SXSW).

While studying for a Fine Art & History of Art degree, Jessica Weiss (vocals + guitar) was exhibiting some of her home recordings of ambient soundtracks to short films when these recordings caught the attention of Daniel Falvey (guitar). The two began swapping mix tapes and started a friendship based on a shared love of melody and an eclectic mix of artists such as The Chills, Grouper, Neutral Milk Hotel, The Magnetic Fields, and The Byrds, ultimately leading to the start of a more pop-focused project which they called Fear of Men.

Starting out, the duo recorded their music on a 4-track and transferred it onto their laptops, which Jess would then use as part of her degree work. They uploaded their songs to bandcamp and immediately caught the attention of UK blogs. Enlisting the help of friends to play drums and bass, Fear of Men approached DIY promoters and immediately began playing live shows.

Fear of Men, completed by Michael Miles (drums) and Robyn Edwards (bass), began releasing singles on DIY and independent UK labels. For a wider introduction into North America, Fear of Men is releasing “Early Fragments” a reverse chronological collection of their previous single releases, many of which were only available in Europe on limited edition 7” and cassette pressings.

Fans of Broadcast and Julie Doiron will instantly gravitate toward Jess’ tender vocals and melodies. The songs are beguilingly sweet while the lyrics are often bleakly nihilistic, meaning that you’ll find yourself singing along to these intelligent, well-crafted pop songs while unwittingly sinking deeper into Fear of Men’s world.