TIGERS JAW, recently released their video for “Escape Plan.”. The track is off their current release Spin, now out on Black Cement. TIGERS JAW, play September 5th in Orlando, Florida.

“’Escape Plan’ is a song about feeling stuck in your old ways, and trying to find the courage to make changes to your life. Earlier this year, when Josh Coll (director) and I were first talking about video concept ideas, I had to cancel a few calls because my grandfather passed away. That got him thinking about conversations he had with his grandfather before he passed. He remembered talking about technology and how our generation relies on it so much. The video focuses on the juxtaposition between these beautiful cinematic ‘real life’ scenes and the stark, sterile, inferior virtual reality that the characters seem to want to escape to. Hopefully it’s a reminder that the real world is beautiful and we should look up from our phones more often.”

The video, which was directed by Foxing’s Josh Coll along with John Komar, is a tragic portrayal of individuals relying on digital avatars to live their lives and form their experiences in a virtual reality. The viewer sees the loneliness and desires hiding by their headsets as their isolation from reality culminates in unbearable regret and heartache. 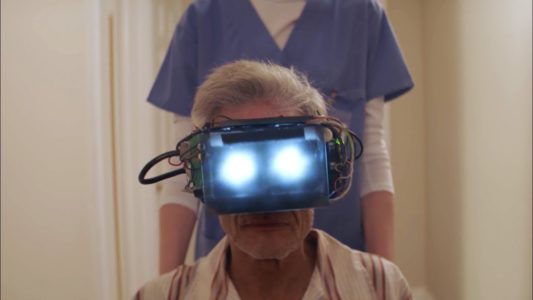