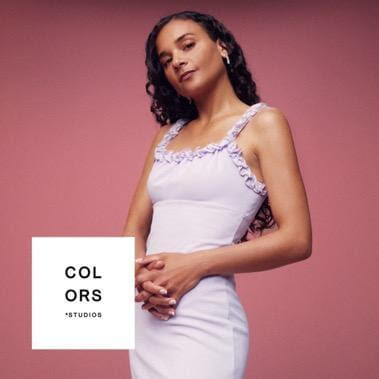 Born in Portugal to Belgian and Cape Verdean parents and raised in Denmark, 4AD artist Erika de Casier started out as an ally of the Regelbau collective (home to Danish house acts DJ Sports, C.K and Central) before writing, co-producing and releasing her debut album, Essentials, through her own Independent Jeep label in 2019. Her follow-up album Sensational tackles relationships and the toxicity of dating. Co- produced by de Casier and Natal Zaks, the music is inspired by music of all genres, including dance pop, house, garage and techno.

Today, Erika de Casier has shared a performance of ‘Make My Day’, recorded specially for COLORSxSTUDIOS. Taken from the Copenhagen producer and songwriter’s second album Sensational, ‘Make My Day’ follows the singles “Someone to Chill With,” “Busy,” “Polite,” and “No Butterflies, No Nothing.”