ERAAS Stream LP – Out Next Week On Felte 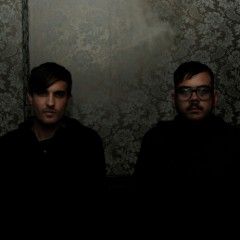 The music of Brooklyn duo ERAAS creates an entirely self-contained world – an illusory, mysterious, at times supernatural realm that conjures a sense of suspense while being seductive. From the brief dialogue that precedes the pummeling beats of opener “Looking Glass” to the closing hiss and crackle of the title track, Initiation represents a coming of age for the band. The album is out next week, November 12th, on Felte  The band has a handful of live dates coming up as well, including Brooklyn with Felte label mates Soviet Soviet this month, as well as European dates later in November.

For anyone who’s heard their 2012 self-titled debut album, Initiation is the culmination of the different themes explored there, honed, refined, pushed further and fashioned into its own unique world; a weird and alluring junction of ghostly atmospheres, punishing percussion, spectral vocals, phonography and sound design, all interwoven into a captivating atmosphere that is distinctively ERAAS’ own.

With Initiation, the band seem to be looking for a sign of hope within the emptiness that surrounds them, trying to make amends with those in their lives, but not quite sure how to. A struggle we can all identify with. The songs on Initiation flow one after the other, creating an entirely immersive experience, playing out similar to a short film full of unexpected twists and turns. Listening to this record feels like a journey of sorts — faceless intruders, dreams of non-existent lovers, ghosts in the doorway, immortality, betrayal, and revenge –– trying to make sense of it all.

Tracks on the album are marked by clattering beats, and fractured vocals that echo through the mixes, bewitching and eerie. Steady, plodding bass that pushes the listener through deserted courtyards and winding hallways where yearning vocals and interlocking rhythms are almost palpable. Static, atmospheric interludes within the songs draw upon found-sound and sampling, contextualizing the album further as it plays out. These spaces create the transitions, often very visual – that allow the characters, and the listener, to come up for air, to make sense of it all.