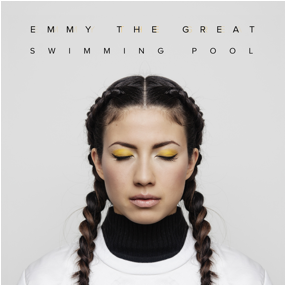 “After years of enjoying the worst performances ever by many of my favourite artists, I decided to join the ear-destroying world of shreds with this, my own lovingly crafted worst performance ever of Swimming Pool.”

The footage was recorded on a recent sold out show at London’s Oslo, where Emmy played material from ‘S‘ EP

My latest album was written in cities including Salt Lake City, Tokyo, Hong Kong, LA, New York and London during an itinerant period in my life, the songs track many personal changes.

“My previous recordings were a reflection of my internal world, but this is a record of me trying to engage with the outside. Over the course of travelling and touring for the last two years I inhabited many cities and landscapes. While I wrote this EP and the album that will follow, everything changed. As I wrote the songs I began to reflect more and more the world that I saw around me, incredibly bright, technologically breathtaking. I am curious about being a person in this world, and I tried to write that into the music.”