Dumb Stop For Nothing 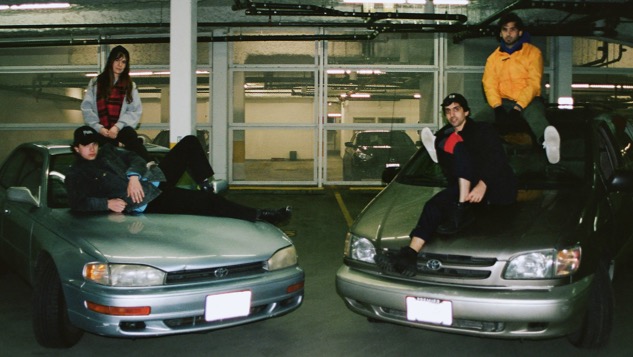 Going into 2018, Dumb had put out enough music in recent memory to cover them for some time, but they kept moving. Their latest album Seeing Green, their first on Mint Records, found them exploring capitalism’s effect on life and relationships and it hasn’t slowed them down at all. We chatted with the band ahead of a string of North American dates to discuss their constant writing and why money became the theme of their new music.

Northern Transmissions: You’ve put out quite a handful of releases in the last few years, so what keeps you all so creatively charged?
Dumb: Franco writes skeletons of songs extremely quickly and then everyone else just jams out the rest of the songs. The combination of the fast writing and the fact that we’re really not to precious about any of them mean they’re done quick. Songs aren’t these super special things that completely embody one person, we’re just drawing and grabbing them like picking berries.

NT: With this constant energy and touring, what’s your secret to not burning out?
D: We’re constantly always on the edge of burning out. It’s fun for all of us and I can say that we’re all the type of people who are comfortable and happy when they’re really, really busy. We all have full-time jobs and have the band going, and party a lot. We’re more likely to get burnt out from our jobs than from the music.

NT: What did you want to do differently on Seeing Green from your past releases?

D: We knew it was going to be a much longer record, and there was a full studio approach this time around. With previous records we’d just write the songs and maybe record them about a week later. This time we practiced them for a while, played them live and tried to make it better because we knew it would be a much longer process.

NT: How did Jordan Koop help you achieve this vision and how did he get involved?

D: We’ve known about Jordan for a while, and we thought the idea of going to an island to record with him was cool. He’d seen us play a few times, and we’d connected over the course of a year. So when we had the opportunity we decided to work with Koop. We didn’t have to record this album ourselves which was a huge help, and he’s just always dealing with all the little problems before we can bring it up. He’s got a good sense of energy so he knows when we need a take with something more, and not necessarily get the perfect take but the right one.

NT: How did you want to explore confusion in Capitalist society in the album?

D: That was initially just a couple songs that were about all these themes of money, power and envy. Then we took that concept and rolled with it after we realized it was really working. The general idea started to come through after a few songs. We liked talking about it and going to Vegas on a previous tour really influenced that more. Even the more serious songs look at having relationships with a full-time job, so it was funny too to explore that through money. “Ripesnakes” is full of financial terminology but it’s not really about money.

NT: I also understand Dumb has experienced a rotating door of bassists for a moment so how did this affect the music and what makes Shelby’s playing feel so tight?

D: Everybody has their own arsenal of riffs and Shelby has a good arsenal. It really just felt like this return to a great vibe. Shelby started with us, left, and when he came back it felt like the beginning again for us.

NT: With so much constantly going on for you guys, what’s on deck for the rest of the year?

D: We have at least two albums worth of songs on the burner, and we all have our solo projects. There’s a country album on the way, about being a Middle Eastern country star, and there’s going to be a lot of recording in the studio.