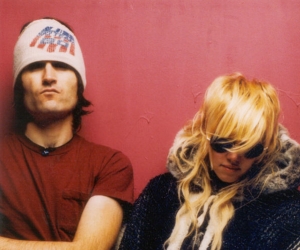 Back in play just to celebrate 14 years, 2 months and 12 days since it’s original release is Royal Trux‘s penultimate album, Veterans of Disorder.

Neil and Jennifer were fans of rock n roll to the finish, sure – but in that, Royal Trux was a dyed-in-the-wool contrarian enterprise, rebels to the core, and everything they endeavored to was viewed from the several angles necessary to call a spade a dupe, etc. And so it was with counterintuitive rose-colored glasses strapped on tight to their work-goggles that Veterans of Disorder was conceived. Accelerator had deployed a unified production concept, with pleasingly mashed-together sonics in an coruscated, ultra-compressed mix. Fine. That was out; New ways of hearing would be necessary this time around. VOD‘s songs seldom sound as if they’re coming from the same session as each other, and the distorto riff-rock that had caused so much intake of breath in ’98 was abandoned for a generally cleaner, wider-ranging sound overall.

Even in the dark early days of the band, humor was an essential element to Truxian logic, and perhaps the most enduring qualities of Veterans (after the hard-hitting rock and the songs themselves) are the laughs. Opening with “Waterpark,” Royal Trux non-ironically located themselves at play (and loving it) in a symbol of contemporary America’s odious heartland. From a band who’d most recently dropped a misshapen and obscure “3 Song EP,” this was comedy itself, but the music has the final word, as Jennifer’s ode to a day in the sun is matched perfectly by Neil’s light-yet-stinging power chords. The call-and-response vocals and percussion breakdowns of “¡Yo Se!” are somewhat pricelessly provocative, as is “Sickazz Dog”‘s musique concrète/pop opera romp (in the process divining an entirely different result than the ur-industrial Twin Infinitives).

Assembled at several studios (including their own home rig) in and around the woods of rural Virginia, Veterans of Disorder unites its divergent approaches under a glossy exterior. This was a band that had fought the major-label wars, and their product, as subversive as it was, was still aiming for the greatest possible impact – an ambition that had no deleterious impact on the music at hand. Instead, Royal Trux revealed themselves once again to be rock satirists supreme, with pure rock and roll that was intent on undermining itself and its audience from within. With less than a year left in their fifteen-year run, Royal Trux were flying at a speed that most bands dream of – and Veterans of Disorder is one of their (many) finest albums. It sees the light of day again on November 19th, 2013 via Drag City.

10. Blue Is the Frequency