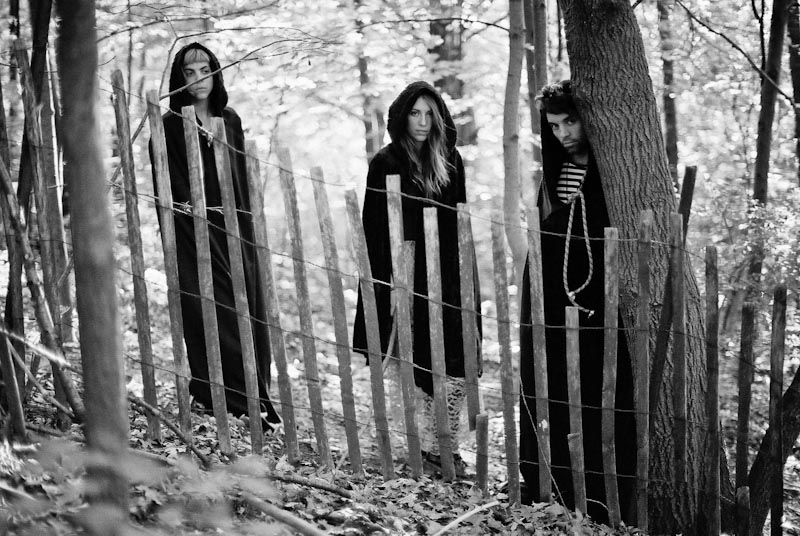 Following the announcement of DOOMSQUAD’S sophomore LP Total Time on April 29th Via Bella Union/Hand Drawn Dracula, and sharing lead-track “Solar Ass”, the have debuted a bizarre video for the second track “Pyramids On Mars”. The video, directed by Ghostprom and Trevor Blumas for PORCH, offers a baffling (and utterly engrossing) display of imagery and symbolism, invoking the likes of Ingmar Bergman or Matthew Barney in a way that’s entirely their own in all of its strange, beautiful glory.

The band explain: “The [‘Pyramids On Mars’] video is about the cyclical nature of time in correlation with memory, biology and the environment,” DOOMSQUAD explained. “It examines the polarities of drought and abundance, barrenness and vitality, male and female, singularly and plurality through a psychic quagmire of astral dust and mirrors.”

In 2010, what began as sandpaper-cheesegrater folk music swiftly shifted genres as siblings Trevor, Jaclyn, and Allie Blumas began to explore trance and electronic beat making. Their shared fascination with dance culture, rhythm, and the unknown, along with their lifelong immersion in the arts, began to manifest as a collective ethos. Before long, DOOMSQUAD had mushroomed into a full-scale art project.

The band’s debut LP, Kalaboogie, was a self-recorded album made in the woods of Northern Canada. Released in 2014 on Toronto label Hand Drawn Dracula, Kalaboogie was a meditative survey of the Canadian landscape. Desiring connection with a national dialogue, the album was an explicit attempt to create uniquely ‘Canadian’ music by drawing on modes and myths from the wilderness.

Since then, DOOMSQUAD have continued to explore new themes and forms of expression. 2015’s EP, Pageantry Suite, marked a deviation from the band’s typically dark and meditative sound. Disco synth tones flavored with African-inspired beats contrasted with more upfront vocals, and aggressive lyrics addressing misogyny, consumerism, and hollow artifice. Pageantry Suite was their first and so far only effort to have been recorded in a studio.

Upon returning home from their recent trip New Mexico, the band continued to draw inspiration from the Toronto arts community, which is vast but extremely supportive and close-knit. Their friendships and connections led to some fortuitous collaborations, including one with Canadian avant-garde legend, Mary Margaret O’Hara, whose otherworldly vocals grace ‘The Very Large Array.” The driving, dirty bass lines, and analogue layers of effects come care of Graham Walsh (Holy Fuck), who produced and mixed the album.

The record features a number of other contributors: Mike Haliechuk of Fucked Up plays guitar. Industrial noise experimenter David Foster aka HUREN offers vocals on “Russian Gaze.” Colin Fisher and Brandon Valdivia of free-jazz duo Not the Wind, Not the Flag bring instrumentals. And galactic twins Josh and Jesse Hasko, who perform together as North America, are a crucial part of Total Time as well. Over the years, the connection between DOOMSQUAD and the twins has deepened and this summer they’re joining forces: the Haskos are becoming members of DOOMSQUAD’s live act.