London based electronic trio Strong Asian Mothers are sharing their new video for their the single “Don’t Let Go” an intriguing rework of the En Vogue classic.

About 2 years ago, Khushi from the band – uploaded an album to Facebook titled “Things are kicking off at the Graham-Patels this Christmas”. It was a series of photos of himself and his family in various seasonal poses with absolutely no emotion on their faces. His fellows band members thought it was incredible and ‘Glumface’ was born. The phrase has since been given an (un)official definition, which can be found below.

— The practice of looking dejected or morose regardless of the situation at hand, often performed in a place of attractive or humorous merit for photographic purposes by the band Strong Asian Mothers.

Speaking on the idea for the video, Strong Asian Mothers said: “Ever since its inception, the practice of glumface has been an essential part of our social manifesto. If you search the hashtag on Instagram, you’ll see it’s overwhelmingly populated by images of us looking glum. Endlessly false smiles in photos are overrated and sometimes it’s just nice to look ‘mardy’. We thought it was about time glumface made its proper mainstream debut and so we thought, “what’s the simplest and cheapest way we can make glumface look most appropriately inappropriate ?” It was uniformly decided: a birthday party.”

“Don’t Let Go is potentially the greatest sexy R’n’B says the band song about commitment ever and so for three random men from London to cover it was pretty bold” – say the band. “We figured that song with these visuals would make it clear we don’t take ourselves seriously enough to think we could ever compete with the women of En Vogue and we will find the image of sixteen pissed-off people holding sparklers combined with that last chorus funny forever…even if no-one else does.

Best friends since their early years, Amer Chadha Patel, Josh Stadlen, and Kalim Patel (KHUSHI) have played in bands together throughout their childhoods but it is under Strong Asian Mothers that they have really found their strength. 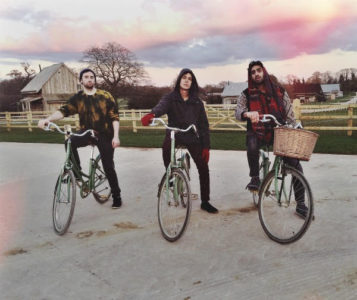