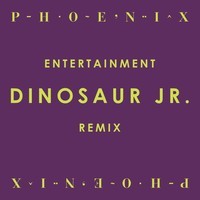 Dinosaur Jr. have created a remix/cover of Phoenix’s ‘Entertainment’ and released it on Soundcloud. “My brother David took me to see Dinosaur Jr. live in Paris around the time when [1991’s] Green Mind was released,” says Phoenix frontman Thomas Mars. “I have been a fan since then.” Entertainment is the first single from Phoenix’s much anticipated fifth studio full-length, due April 23 on Glassnote.