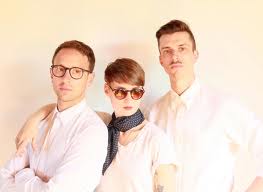 After writing and demoing on an August trip to a lakeside cottage, Shabason and Adams went into the studio with engineer and co-producer Roger Leavens. They asked that Toronto vocalist Carmen Elle come in to try singing on a track. Both Kieran and Joseph had seen her perform in groups around the city and thought her voice might add something special to the songs. This was a massive underestimation. Regardless of who wrote these songs, the lyrics and melodies belonged to Elle the moment they escaped her mouth, each nuance of phrasing and melody deepening the sentiments put forth. With the last puzzle piece in place, it felt right to give the project a life beyond the studio, and DIANA had begun.

”We were blind to all the ways we sat and watched it fade away…” echoes the reluctantly detached refrain at the end of “That Feeling.”It echoes through a mist of synths layered on top of insistent drums and bass. It is future music about a wish for a past that has all but disappeared. There seems to always be something looming in the corners these songs, a pop sensibility is undeniably present, but never overwhelming. There is always just enough room left for the imagination to complete the picture.

The band will be going to the UK next week for a short tour and will be supporting Austra in North America late this summer. An updated tour date listing is below.

May 18 – Brighton, The Great Escape @ Digital