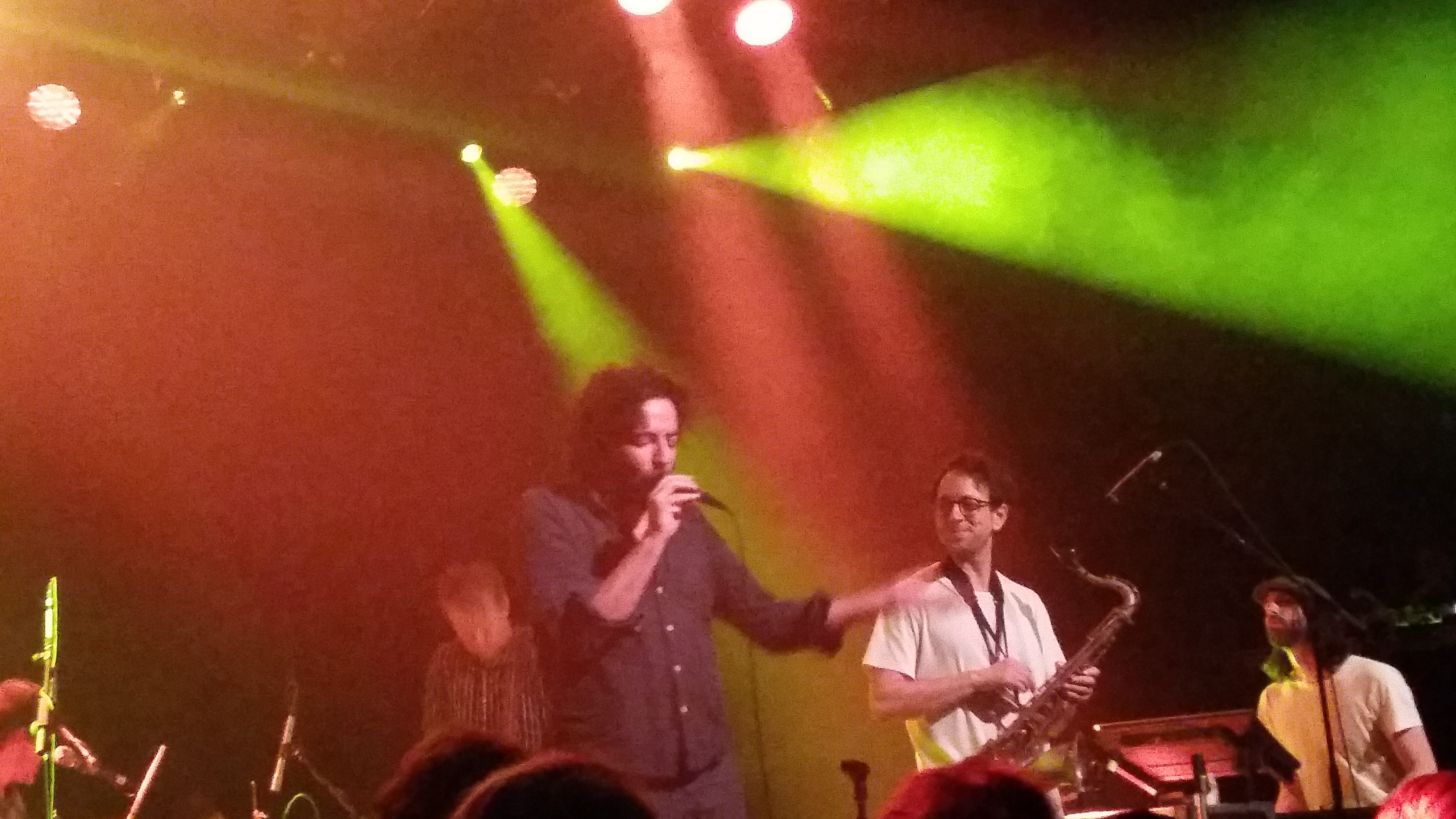 Destroyer’s homecoming show at the Commodore Ballroom last night (Feb. 9th) got off to an inconsiderate start for Seattle guests Mega Bog but slipped into an appreciative, heartwarming reception for the Vancouver indie rock veterans of 20-plus years.

From the get-go, Mega Bog were bogged down by constant chatter that filtered from seemingly every part of the venue except the front of the stage. Mega Bog powered through though, rewarding everyone who paid attention.

Mega Bog began many songs with chimes, wilting clarinet, and lightly strummed guitar, but the band rarely allowed themselves to lock into pleasant grooves. Instead, the four-piece demolished everything they started, collapsing into off-kilter rock with knotty basslines, drumming as smooth as being drawn in a carriage by horse over cobblestone, and guitar that jabbed, stabbed, needled, and sliced. Jazz genius Joseph Shabason of Destroyer (and many other groups) made a cameo and ripped it up on sax on two of Mega Bog’s most cacophonic songs of the night.

Despite rocking so hard, singer/guitarist Erin Birgy noted to the soundperson, “I can’t even hear my guitar over people talking.” The appreciative audience members cheered her and shushed the others as those at the back, at the side tables, and in the balcony… continued talking. She looked up and out as she and the band played. Was she reciting lyrics in her mind? Focusing on playing her parts? Or giving death stares? Whatever the case – whether or not the tension was only perceived – Mega Bog’s eruptions from loungy, dimly lit cool and spoke-sang vocals to yelps, cries, and musical movements couldn’t help but feel like constant jousts between the band and the audience. Despite the admirers, the set was an unjust send-off to Mega Bog’s month-long tour with Destroyer.

No such issues plagued or even slightly disrupted Destroyer as the crowd, which I overheard was sold out, amassed. Destroyer materialized amidst a bed of smoke that set the scene for “Sky’s Grey”, the opening track from last year’s ken. From there, Destroyer were all rock powered by double brass (trumpet and sax), clarinet, and synthesizer. “Hey, Snow White” had an electronic New Order quiver. Any time Dan Bejar raised his voice the way he did on “Snow White”‘s chorus, it contrasted with his soft-spoken demeanor and thereby made for some of his most exquisite vocal moments. Destroyer flowed right into “Tinseltown Swimming in Blood” which sounded the most 80s of all.

Many of Destroyer’s selections were busy with multiple moving passages, but the band included more platitudinous, mood-oriented choices too. The straightforward “Cover from the Sun” was a rousing rocker, as brief as it was. A delicate piano (keyboard) line over strummed guitar led “Saw You at the Hospital” to an outro of kickdrum and droning synth and trumpet with little activity between. Similarly, unrecognizably ominous trumpet and electronic ambience opened “Suicide Demo for Kara Walker” which featured Shabason on both flute and sax as well as Bejar shaking out a tambourine

The eight-piece Destroyer sounded big, bold, and rich, but the brass section shot piano-rocker “European Oils”, which Bejar dedicated to Mega Bog, to heights the band never matched the rest of the night. Some of Destroyer’s best moments were also when they aimed low though. On “A Light Travels Down the Catwalk”, the band plunged through a valley of dark synth. ”Stay Lost” dwelled at the bottom of a ravine of bass and more synth. But the song surfaced with choruses that sparkled more brightly in the dark. And “Bay of Pigs (Detail)”, Destroyer’s final song before the encore, worked on the strength of a pulsing kick-drum until a stand-alone synth line serrated the whirring, contemplative ambience, before the drumming swivelled towards a danceable beat and conservative fills.

“We decided to play an old-timey song,” Bejar said before unpackaging the grand, finale-spirited “Looters Follies” for the encore. But Destroyer ended in more concise fashion, with the instantly inviting “Chinatown”. “You can’t walk away,” Bejar and fellow Vancouverite Sibel Thrasher, who was absent live, sing on the album version. After performances so rich and living, it was hard to walk away from either Destroyer or Mega Bog. Welcome home, and hope you’ll come again.