Dent May “2099,” a song to soundtrack the apocalypse 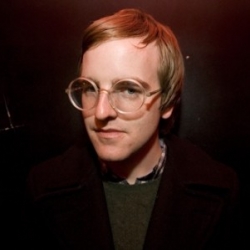 Instead of recording a holiday song this year, Dent May has chosen to release a song inspired by the supposedly impending apocalypse. “Everybody’s talking about the end of the world,” says Dent May. “A lot of people are pessimistic about the future of mankind. My take is that this is just the beginning for us, and there’s a lot of love left to spread throughout the universe. ‘2099’ goes out to my fellow dreamers who plan to stick around into the next millennium.”
In the years since signing with Paw Tracks in 2009, Mississippi native Dent May has made music that balances saccharine pop sincerity and campy affectation. His debut LP, The Good Feeling Music of Dent May & His Magnificent Ukulele, put wry storytelling at its fore, but imbued each track with sweet strums of the titular instrument and earnest harmonies sure to arrest listeners’ sympathies. Eager to explore different styles, the two singles released since the album, “That Feeling” and “Fun,” have seen May plugging in and finding footing somewhere between 60s psychedelia and disco-era balladry in the vein of Ashford and Simpson, a vibe he expands on with his new record, Do Things.

Played entirely by himself and recorded in sessions split between his bedroom at the Cats Purring Dude Ranch and a small cabin by a cotton field outside Oxford, MS, Do Things finds the self-described “wedding reception band on acid” purveying the same heavy helpings of sentiment, but forgoing the jocular tone of his debut for a more contemplative-but still relentlessly optimistic-demeanor. Underneath the shiny veneer of synthesizer filigrees and harmonious coos, May zooms in on such timeless subjects as the nature of friendship, finding purpose in a world that seems devoid of it, and dealing with insistent feelings of malaise. “Funk” is certainly a word that’s written all over the album, and May’s Orange Juice-ian take on it lends songs like “Best Friend” and “Don’t Wait Too Long” a sprightly boogie and conjures images of soft-lit rooms and mirror balls. When not thumping and grooving, Do Things bops and sways along the psych-pop avenues of “Tell Her” and the ascending melodies of “Find It.” Full of stylistic changes but retaining May’s singular voice, Do Things is a great step forward for the pop devotee.