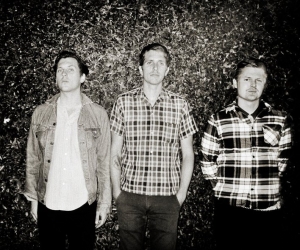 The Tijuana Panthers got their name from the little black ceramic panther that was a present from their neighbor Max Baker—yes, the Max Baker who they named their first album after, and who deserves a bio all his own—and they got their sound from that strange place where punk bands crash into pop music and come out the other side, bristling with hooks and hitting three-part harmonies almost by happy accident.  Even the Beach Boys were once a garage band, and after them came the waves of kids playing rock ‘n’ roll somewhere between the surf and the surface streets. Then when punk showed up in the ‘70s, it was just an adjustment in hairstyle and speed. The Buzzcocks did this a whole hemisphere away, the Real Kids and the Modern Lovers did it on the other side of the country, and the Crowd and the Simpletones did it just a few towns over. And now Tijuana Panthers come striding proudly out of their hometown of Long Beach, California, with Semi-Sweet, their most fully realized album yet.

Semi-Sweet has every Panther contributing a part in the entire album-making process, all the way down to brainstorming new songs on drummer and singer Phil Shaheen’s ukelele. Traditional Tijuana Panthers engineer Victor Orlando Nieto split the sessions for Semi-Sweet with new engineer Matt Vasquez, which worked with the new creative process to give the Panthers’ latest a different feel—something instantly apparent from first jittery notes of the Swell Maps-meets-Urinals DIY clatter-pop opener “Above Your Means.” (In fact, last track “Boardwalk (Reprise)” is a straight out of the Tijuana Panthers’ inbox, with Phil’s wedding ring knocking at a tabletop to help keep the beat.)  From there, it’s a twist-and-turn-y journey through at least four decades of off-center from-the-heart music. “Tony’s Song” matches the relentless energy of the Wipers with instantly catchy beach-punk harmonies, while “Father Figure” left-turns toward the kind of complicated jangle-pop of New Zealand’s Verlaines. “Push Over” is like some kind of Howard DeVoto demo that suddenly splits into a Mickey Baker guitar line, and “Juvy Jeans” is pure my-daddy-was-a-New-York-Doll teen-punk hilarity. (Or maybe the Dead Milkmen? Phil is a longtime fan.)

Of course, the surf guitar they built their band on is still surging along—leading the band through their moody “Baby On Board” and then bouncing into the darker-than-it-seems “Forbidden Fruit.” And then there’s the pitch-perfect Nerves cover, a reverent redo of “One Way Ticket” by a band that in sound and sentiment both were pretty much the Tijuana Panthers of their day.  They’re really just aesthetically simple dudes, says bassist and singer Dan Michicoff—they know their songs are done when they not only sound right but feel right, and when they’ve got that same rare combination of harmony and velocity and honesty that’s pushed bands out from their garage since the invention of the electric guitar. “And,” he adds, “those fans of ours that like to play our music at their hot Hawaiian luau parties will not be disappointed.”