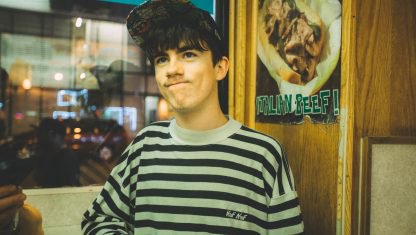 Declan McKenna shares “British Bombs” the first single since the release of his debut album, 2017’s What Do You Think About The Car? (Columbia Records). Produced by James Ford (Arctic Monkeys, Foals, Florence and the Machine), “British Bombs” is a bruising, acerbic left-field pop song and a powerful anti-war statement which refers explicitly to Britain’s role in the global arms trade, specifically with reference to the Yemen crisis. McKenna today also shares the Ed Bulmer directed music video for “British Bombs.”

“British Bombs is a tune I wrote about the hypocrisy of the British arms trade and the weapons convention in London. I think too often it’s implied that matters in the world are too complex to not end up with war, or to not possess and sell weapons, and I just think it is pure bullshit. Not only do we still engage in wars far away from our homes, which settle nothing and fuel extremism in the aftermath, we sell weapons to other countries full well knowing where they end up.

“I wanted to write a song that was outright against war, in any form. Violence breeds violence and I just don’t think the world is too complex to set a peaceful precedent, but it seems the business of war is what keeps happening. To say it’s a shame feels like a huge understatement.”

Declan McKenna arrived at sixteen, with a series of left-leaning pop songs (Brazil, Paracetamol, Isombard). A multi-instrumentalist by the time he was a teenager, he began releasing tracks on his Bandcamp page when “Brazil” began to attract viral followers in January 2015. He’s since performed at Glastonbury, Reading, Latitude, Lollapalooza, Outside Lands and SXSW among other festivals.