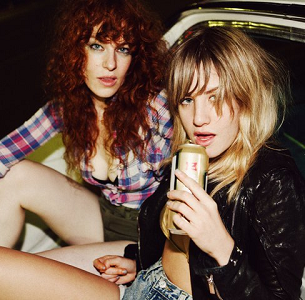 Los Angeles’ all-female rock-duo Deap Vally have announced details of their upcoming tour, including dates with The Yeah Yeah Yeahs and dates co-headling with Free Energy. The girls will play a number of shows this spring and summer, beginning on April 14 and 21 at California’s Coachella Valley Music and Arts Festival. The band will also hit the road for some east coast dates with Free Energy in May, including a show at New York City’s Bowery Ballroom on May 5, for what is sure to be a great way to spend Cinco De Mayo.

Deap Vally are touring in support of their Get Deap! EP, to be released on April 9th. This is the band’s first U.S. release on Cherrytree/Communion/Interscope/Island. The Get Deap! EP offers the first taste of what’s to come on the band’s upcoming full-length album, which is near completion and will be released later this year.

The Get Deap! EP, produced by Lars Stalfors (The Mars Volta, Matt & Kim) includes four songs, including “Gonna Make My Own Money” and new song “Lies.” Watch the new video for “Lies,” which is rapidly approaching 400k views, at the link below: