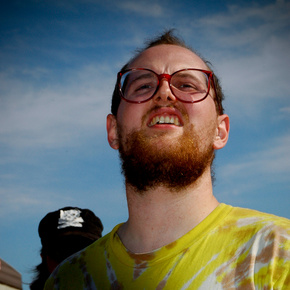 Dan Deacon teams up with Director/Editor Dave Hughes (Off The Air/Adult Swim) to create a 22 minute music video odyssey that takes viewers on a skewed trip through the American landscape and beyond. The music is the four-part “USA Suite,” off Deacon’s latest album America, and the visuals were culled from artists all over the world.

Dan Deacon this week also shares a free download of his new single “Why Am I On This Cloud?,” recorded for Adult Swim’s 2013 Singles series (that’s the cover art for the single above).  It’s a track made up of samples of various Adult Swim shows – see if you can identify the source material.

As part of their Kronos at 40 Festival taking place at Lincoln Plaza this summer, Kronos Quartet will perform new four commissioned pieces, including one by Deacon on July 28 at Lincoln Center — the performance will also incorporate the use of the Dan Deacon smartphone app. More info. here.

Next week, Deacon heads out with Animal Collective to make up rescheduled Canadian dates and will also perform a free show July 11 at Millennium Park in Chicago, IL as part of the Loops and Variations 2013 series. He has also announced new dates including a free show August 2 at Prospect Park as part of the Celebrate Brooklyn series and added to the lineup of the Atlantic Ocean Comedy & Music Festival, a cruise which departs from Miami Sept 13.