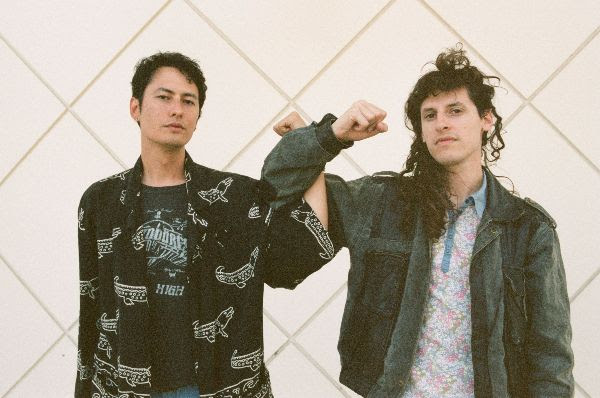 CMON have dropped their new single “Mindboggling.” The track, off their forthcoming release Confusing Mix Of Nations is due out April 3rd via Mexican Summer. On the video, the band make it very clear: “I’ve wanted to be in a music video like this since I was 5”

CMON, includes of Josh da Costa and Jamen Whitelock. Members of New York’s DIY scene with their band Regal Degal, da Costa and Whitelock were acutely aware of how closed off they had become. “We had our little world and it was like we were these cavemen huddling around this fire that only we really understood. At the end of the day, that was a betrayal of making art—we were guarding this thing, like it was our secret,” da Costa says.

As Regal Degal mounted its final tour, with clubs pushing their set times earlier and earlier to make space for the DJs who followed da Costa and Whitelock took notes. “We were definitely getting swept further from where we wanted to be and the excitement we wanted to portray,” Whitelock says. “There’s such joy in going out and dancing that was completely missing in a lot of shows, especially in New York. Nobody wants to move, everyone’s too self-conscious. But when you go to the club, everyone’s in it—you just want to dance, and that’s all that matters.”

The community potential and the promise of physical liberation that came with dance music spoke loudly to both da Costa and Whitelock, and following the dissolution of Regal Degal, da Costa set up a new life for himself in Los Angeles—a steady relationship, a pet bird, a car—and got down to work with a copy of Ableton. Back in New York, his head spun by DJ Rashad, Whitelock was learning to program, too. They kept their line of communication open, and eventually Whitelock started making the cross-country trek to work and record with his old bandmate. They mined the sound they established with Regal Degal, applying their old band’s heavy atmospherics and melancholy soul to four-on-the-floor rhythm grids and smoothed-out guitar lines, taking production cues from EBM and AOR in equal measure.

The resulting album, Confusing Mix of Nations, was recorded in a handful of small private studios in Los Angeles (“no pro zones”) and produced entirely by da Costa while he and Whitelock learned how to manipulate their synths and keyboard rigs on the fly. They took their new name from a section divider in a record storage space where their Regal Degal bandmate Josiah Wolfson once worked. “There was a section of world music called “Confusing Mix of Nations,” da Costa says. “Taken literally it sums us up perfectly. I was born in NYC and partially raised in Brussels by parents who are from the Carribean, while most of my family lives in Amsterdam, and Jamen is half-Taiwanese from Miami.”