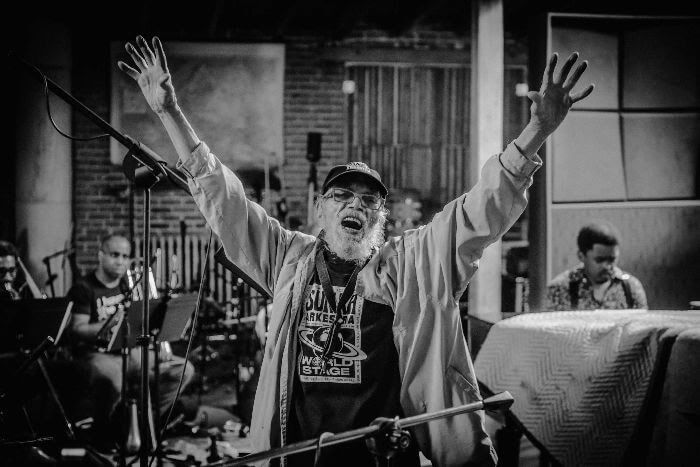 Sun Ra Arkestra kave shared “Chopin,” a track lifted from their album Living Sky, available October 7, 2022 via Omni Sound. “Chopin” is the first studio recording of Sun Ra’s elaboration of “Prelude in A Major” of the Frédéric Chopin “miniature Opus 28 No. 7,” which previously appeared on only a few live recordings. “‘Chopin’ was one of Sun Ra’s features from Marshall Marshall Allen’s alto, the originator of Avant Garde saxophone, truly a wonder to behold at the age 98,” says baritone saxophonist Knoel Scott. “This freshened arrangement of this Sun Ra Classic is a testament to the vintaged mastery of Marshall Allen and is truly reflective of his position as a keeper of the Sun Ra Legacy.” The features a tasteful piano line spread among the brass, and Allen’s stabbing sour-toned solos sandwiching the graceful solo statement of veteran French horn player Vincent Chancey.

Living Sky was recorded on June 15, 2021 at Rittenhouse SoundWorks in Philadelphia and features a total of nineteen musicians. Mixed and mastered by Dave Darlington (Eddie Palmieri, Brian Lynch, Wayne Shorter), the album was commissioned by executive producer Ahmet Ulug, who has a long history with the Arkestra, dating back to the 1980s when he regularly listened to the group in Philadelphia and New York, and promoted Sun Ra’s Istanbul show in 1990 (as well as numerous shows with the Arkestra after Ra’s departed Planet Earth). After retiring from the music industry a few years ago, the current state of the world moved Ulug to step back into the fold, launching Omni Sound (named after a note Sun Ra wrote during his visit to Istanbul, “Omniverse is the totality of all universes and you are welcome to be citizens of Omniverse”) and collaborating with the group that ignited his interest in jazz and improvised music. Omni Sound reached out to Allen to commission a new instrumental album from the group, requesting sounds “Spiritual and hypnotic and to that effect down tempo, melodic and grooving…….from the kora to EVI; ancient to the future. Music that is accessible and healing in the Covid era.” In July of 2021, Allen fulfilled the request with Living Sky, a gorgeous collection of music.