“Chloe” by Matt and Sam’s Brother

Matt and Sam’s Brother is the new project of songwriter Charlie Kerr. Kerr is the frontman of Vancouver indie rock outfit JPNSGRLS, but along the way, he gradually accrued a catalogue of solo songs that didn’t fit within the constraints of scrappy, distortion-laced rock and roll. Some of these songs date back to when he was just 16, with others having been written slightly more recently, and for years they existed only as private acoustic demos.

“I’ve grown up from the person who wrote those words, but I can still 100% connect to them,” Kerr explains. “I showed the songs to a friend of mine and she said, ‘This is like reading your diary.’ It’s a personal set of songs.” The unflinchingly autobiographical tone of Matt and Sam’s Brother’s music is mirrored by the familial band name, which undercuts the egotism inherent in a solo project.

The vocals are front-and-centre, with the album’s eclectic sonic exploration tied together by Kerr’s introspective storytelling and impassioned, pop-friendly vocal hooks. Unlike the gleeful scuzziness of his past work, Kerr entered this project with a new philosophy: “What if I just made beautiful music?”

With a debut album already complete, Kerr has already begun working on new music. It may have taken him a decade to finally capture these songs on tape, but he’s already excited about the future prospects for Matt and Sam’s Brother. 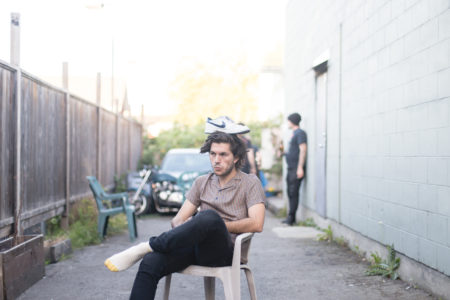