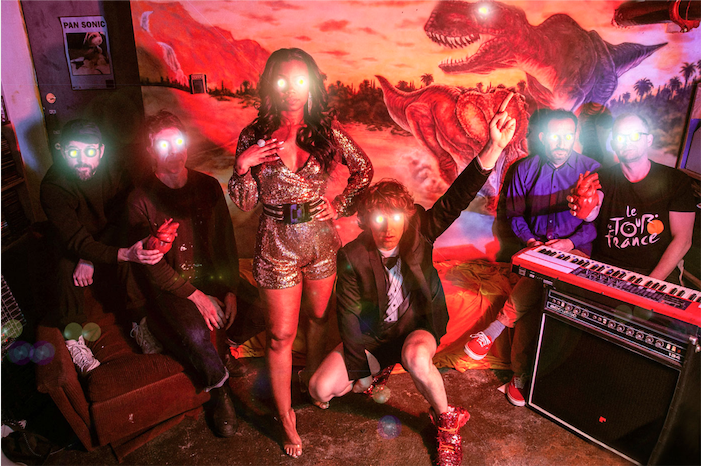 !!! (Chk Chk Chk) by Kelsey Bennett
Share on TwitterShare on PinterestShare on PocketShare on RedditShare on FacebookShare on Email

Dance-punk band !!! (Chk Chk Chk), have released the single “Serbia Drums,” the track is off their forthcoming release, Wallop, available August 30th via Warp Records. The band has also just announced a world tour in support of the forthcoming album, where they’ll be taking their dynamic, groove-laden live show on the road to audiences across the globe. Full dates are below.

Wallop was recorded over the past year in lead singer Nic Offer’s Brooklyn apartment, and follows 2017’s Shake The Shudder. “Our process was to get loose and get into uncharted territory,” says Offer.

Wallop sees friends from across the spectrum appearing on a number of tracks, including Liars frontman Angus Andrew, Maria Uzor of British dance aesthetes Sink Ya Teeth, and Glasser’s synth-pop wizard Cameron Mesirow, who all join Offer and !!! co-vocalist Meah Pace on this barn-burning party of a record.

“We’re not the kind of band that sits down and says, ‘Let’s make a record now,'” producer and multi-instrumentalist Rafael Cohen continues. “We just keep going, which is good because it leads to less of a narrative for each album.” With an array of producers lending a hand—including Cole M.G.N. (Beck, Ariel Pink’s Haunted Graffiti, Julia Holter), Graham Walsh (Holy Fuck), and longtime collaborator Patrick Ford.