Chemtrails ‘Calf of the Sacred Cow’ Out Now 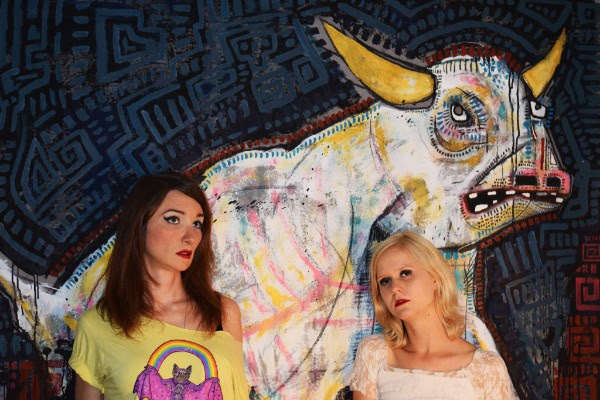 Punk Slime Recordings have released today Calf of the Sacred Cow, the long-awaited debut album from London’s Chemtrails. Calf of the Sacred Cow is out now via PNKSLM Recordings on limited edition vinyl and digitally and follows their two acclaimed previous EPs Love in Toxic Wasteland and Headless Pin Up Girl which received praise from the likes of KEXP, Stereogum, The Line of Best Fit, GoldFlakePaint and more.

Punk Slime Recordings are proud to present the debut album from London based Chemtrails. Founded and fronted by romantic and musical partners Mia Lust and Laura Orlova, they make catchy, fuzzy, lo-fi pop music, somewhere between The Pixies, Black Lips and Blondie, with lyrics that are surreal yet earnestly meaningful.

Chemtrails made their debut in September 2016 with the single ‘Aeons’ on Stockholm label PNKSLM Recordings and have since released two Eps. The first, Love in Toxic Wasteland, tells stories of savagery and spirituality in a post-apocalyptic world, with melodic songs built out of raw, heavy guitars and dreamy, reverb-soaked Farfisa organ. The second EP, Headless Pin Up Girl, has a more pop-forward feel to it, with Mia Lust’s lyrics getting deeply personal as she openly reflects on her place in the world as a transgender woman.

The band’s debut album, Calf of the Sacred Cow, is out now via PNKSLM Recordings, and like all of Chemtrails’ output so far it was recorded and produced in Lust and Orlova’s living room. The album sees the band exploring wider territory and includes some their most unusual psychedelic power-pop songs yet, as well as their heaviest, most aggressive garage rock numbers.