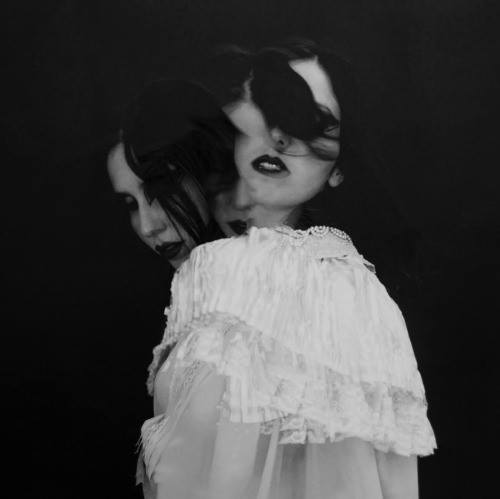 Chelsea Wolfe has released the stark black and white video for newest single, “Carrion Flowers,” directed by Wolfe herself and bandmate Ben Chisholm, with all editing by Chisholm. Shot in California and New York state, Wolfe shares,

“The visuals in the video allude to the drought in California and frustration about corporations being allowed to pump out all the water, destroying environments and communities, just to sell it back. While writing Abyss, I lived near where the water is piped into Los Angeles, but the lakes were dried up and the mountains were burned from fires. During filming we were exploring cracked lake beds and washed out roads – at one point I was laying in the middle of an abandoned canyon road with no chance of a car coming, and it was very surreal and quiet. I closed my eyes for a moment and when I opened them there were vultures circling overhead like I was some exotic roadkill, so we filmed them too.

The scribbles and ropes in the video are about my own madness and self-doubt, and costume designer Jenni Hensler made me a human cocoon from this insane fabric – it represents a feeling of claustrophobia, like you just want to scratch your way out of it. And there is anger in this song; it’s got a sense of revenge for anyone who has suffered or died because of injustice.”

Wolfe will take her live show on the road this summer and fall, kicking off at the end of August and making her way across North American through October.

+ with Upsilon Acrux
# with Wovenhand
* with Mamiffer