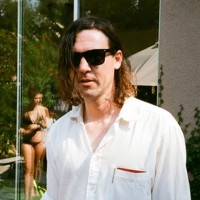 Big Wheel and Others is Cass McCombs‘ seventh-and-a-half album and will be released October 15th (October 14th in the rest of the world) on Domino Records.

Within his decade-long career, most recently releasing WIT’S END and Humor Risk in 2011, Big Wheel and Others is Cass McCombs’ most encompassing work to date, marking a bold new chapter in the myth of this fascinating and singular artist. It’s brimming with McCombs’ gift for evocative storytelling, discerning introspection, and heartrending melody delivered through a haze of mystery and romance.

Big Wheel and Others comprises twenty-two songs (or, as they are more often and unfortunately known in the After Compact Disc-hereafter “ACD” era-tracks). But “double album” implies bloat, prog, and concept, so, let’s stick with “songs.” Big Wheel and Others is a bundle, a bindle, a hay bale, and an oil barrel of songs. Some of the genres that are to be found in varying degrees in the songs on this album are: road songs, rock songs, folk songs, blues songs, country songs, rhythm and blues songs, skronk non-songs, cinema songs, cult songs, poem songs, jams, and ballads – to use however you wish.

Big Wheel and Others Tracklisting:

10. Everything Has To Be Just-So

10. Honesty Is No Excuse