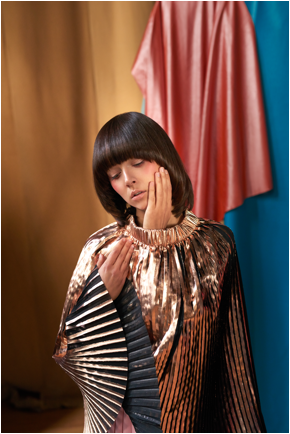 Following the recent release of her standout debut English LP Clashes (through Play It Again Sam) and the sharing of the dark, dystopian video for first single “Horses”, Polish alt-pop wonder Brodka has debuted a striking and symbolic video for track “Santa Muerte” on The Independent. The track-inspired from a trip to Mexico-is propulsive and delicate, capturing Brodka’s nuanced reflections on death. The video manifests these themes through the conduit of a Japanese Butoh dancer journeying through a forest. Brodka explains: “I was really surprised by how people treat death there. Young kids from a very early age are taught not to see it as something depressing, but something that tells you about the next life, and not really in a sad way. The song is like a conversation with death but treating it as a conversation with a friend. We have this relationship with death all of our lives”.

Having already released three acclaimed albums in her native Poland, including 2010’s double-platinum Granda, Clashes will mark her first release in English, and-furthermore-her most diverse and ambitious album to date. Clashes dazzles with Brodka’s singular blend of orchestral pop and cosmic poetry that’s undercut with hint of brooding darkness. Even in a language that’s not her first, she asserts her informed approach to songwriting in a way that’s emotionally engaging. Dramatic without being overwrought, Clashes is a widescreen and determined listen from an artist in constant forward motion.

Operatic and intelligent, palpable and profound, Clashes isn’t just a step forward for Brodka, it’s a bound, and promises only the expansion of a global audience for such a truly remarkable artist.