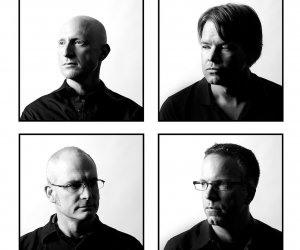 The first ten seconds of “Fleece,” the opening track on Shade Perennial, Bottomless Pit’s mesmerizing third long player, sets the tone for the rest of the album. A carefully considered series of notes are picked on baritone guitar, deliberately unfolding the melody, only to be interrupted by a staccato burst.  The guitars wrap around one another over a propulsive and elegantly understated rhythm section. Space opens in the music for a voice to emerge. It is enveloping and hypnotic, and you may play it over from the beginning a few times before moving on.

What do we know about Bottomless Pit? Perhaps you’re already familiar with Tim Midyett and Andy Cohen from Silkworm, a band that put out nine albums between 1987 and 2005. Maybe you’re a fan of Seam, with whom Chris Manfrin drummed, or .22, one of bassist Brian Orchard’s other groups.

By the time the feedback begins and the band fades out on “Felt a Little Left,” Shade Perennial‘s final and possibly most widescreen tune, thirty-two minutes will have passed under Bottomless Pit’s spell. This music is an incantation. It’s post-punk perspiration and the well-worn warmth of Crazy Horse. It’s inspired and assertive and won’t make you ashamed to call it the blues.

Shade Perennial will be released on October 29, 2013 via Comedy Minus One. It is available on LP with a compact disc included in the packaging for convenience. It will also be available on all digital platforms.