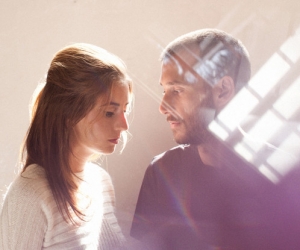 In the Summer of 2012 Boardwalk duo Mike Edge and Amber Quintero were introduced by mutual friends in Los Angeles. Although both were involved in different musical projects (Mike contributing his musical and production know-how, Amber contributing her vocal ability), an undeniable creative chemistry made itself present between the two within a short time of introduction. This chemistry sparked a curiosity that could only be satiated by a collaboration of minds. The creative compatibility test came one day on an impromptu road trip. The elements involved were basic yet obligatory: a guy, a girl, a car, the open road. The end result was ‘I’m Not Myself,’ their first song written together. The title itself is indicative of Mike and Amber’s altered state of being after that ride. The road trip was over, but the journey was only beginning.

Focused on creating a sound that was their own, Mike sourced and built the gear that was requisite in capturing the essence of their sound. Their exploration of tracking analog sounds and vocal melodies over dreamy instrumental layers continued until an album of songs was complete. The needle makes contact with the record, and so continues Boardwalk’s journey, their self-titled album released by the legendary independent music label Stones Throw Records.