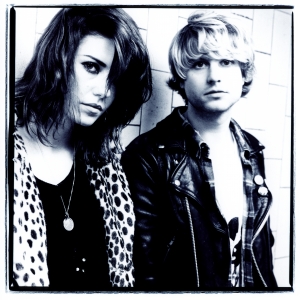 Blood Red Shoes will release their new, self-titled album through Jazz Life on 3rd March. Produced and recorded by the band in Berlin, and mixed by indie god John Agnello, Blood Red Shoes is the follow up to 2012’s much-lauded In Time To Voices.

The duo recently handed power over to their fans to release a brand new song. The band placed 10 QR codes in 10 different cities around the world and the track was unlocked once all the codes had been discovered. Click below to hear “The Perfect Mess”…

“For this album we packed up all our stuff, got in a van and drove to Berlin, where we lived for months in a rented studio space,” explains Steve. “No producer, no engineer, no A&R people, just us two in a big concrete room in Kreuzberg, jamming and recording our songs whenever we wanted, how we wanted with nobody to answer to except ourselves. It came out as our rawest, heaviest, sexiest and most confident sounding record so far”.

Blood Red Shoes is the band’s fourth album, but the first one they’ve self-produced, having previously worked extensively with Arctic Monkeys producer Mike Crossey .“Everything was so perfect on our third album (‘In Time To Voices’), but we realised that the imperfections are what makes our band – that’s what people like about us,” says singer/guitarist Laura Mary Carter.

It’s perhaps a viewpoint they’ve arrived at with the confidence of having achieved something relatively few bands of their generation have achieved – making it to their fourth album. “I think there’s an element of luck involved, but mostly it’s because we work our arses off,” says Carter, who also came up with the concept for the album’s sleeve. “We never switch off. We never let anything just happen; we steer everything. A bit control freaky, really.”