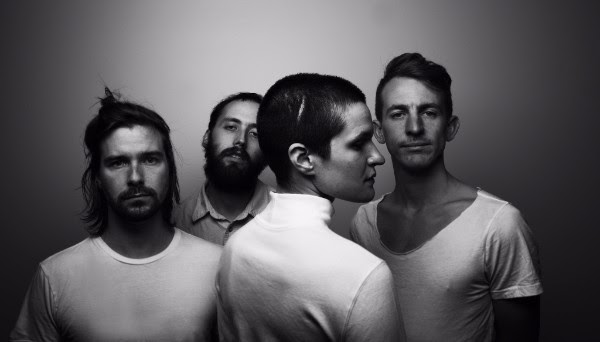 Big Thief return on June 9th with their highly anticipated second album, Capacity. The trails that the band takes us down on Capacity are overgrown with a wilderness of souls. These are carnivorous stories, with pangs of sadness and joy. Singer and guitarist Adrianne Lenker shows us the gentle side of being ripped open, and then recounts the second act of pulling oneself back together to prepare for it all to happen again.

Today, Brooklyn’s Big Thief share “Shark Smile”, the newest song drawn from Capacity (out via Saddle Creek). Matt Wilkinson premiered the song over the weekend on his Beats 1 show, and now it’s available for all to hear.

Asked to give some context to the song, singer and songwriter Adrianne Lenker said, “‘Shark Smile’ is the story of a car accident in which one dies and one lives. She recalls her lover leading up to the moment of the wreck, wishing she’d been taken into the next realm too.”

“There is a darker darkness and a lighter light on this album,” reveals Lenker. “The songs search for a deeper level of self-acceptance, to embrace the world within and without. I think Masterpiece began that process, as a first reaction from inside the pain, and Capacity continues that examination with a wider perspective.”

The first song to be shared (which will also be available on Record Store Day as a 7″ b/w non-album track ‘Breathe in My Lungs’) was the utterly captivating and semi-autobiographical “Mythological Beauty” (learn more about the song via her interview with NPR Music’s Bob Boilen on All Songs Considered). The video for “Mythological Beauty” features a cameo by Lenker’s mother (who also graced the cover of Masterpiece). The gorgeous video, directed by Vanessa Haddad and Adam Gundersheimer, leaves itself open to interpretation as it follows a resolute woman played by Adrianne carrying a stricken man played by Buck Meek through the woods.