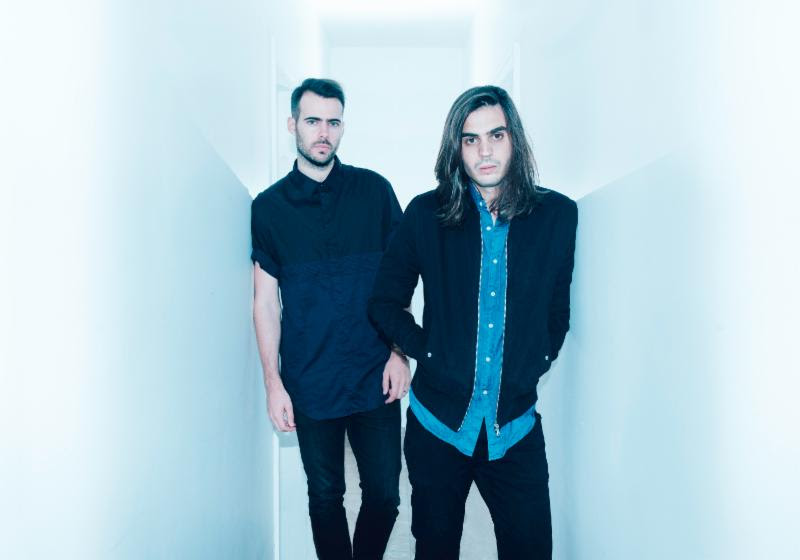 New York duo Beacon, the project of Thomas Mullarney III and Jacob Gossett are back with their sophomore LP titled Escapements out on Ghostly International February 5th.

Escapements is about time, to put it simply, and all of the baggage it brings. The title is taken from clock mechanics; escapements are timekeeping regulators designed to transfer energy at a constant pace. “I was attracted to this concept because of the entropy it implies,” Vocalist Thomas Mullarney explains. “Friction and changes in amplitude over time mean every escapement, no matter how well crafted, will lose its accuracy and effectively slow down time via its own decay.” This theme is delicately explored through Beacon’s music and lyrics, engaging ideas of pain and loss with a surreal palette. Whereas the duo’s debut was more streamlined and defined, Escapements thrives on an amorphous, free-flowing nature.

The Brooklyn band start off with hard-hitting bass beats alongside a sparkling flurry of synths, driven by anchored, steadied resolution. It flits towards the more ambient-pop side of the spectrum and leans away from the likes of R&B, but its frothy beats will be hard to resist under the lights of the disco ball.”

After the initial demos were written, Escapements was refined and recorded over the course of nine months at Beacon’s Brooklyn home studio and Gary’s Electric, where it was mixed by Al Carlson. Tycho drummer Rory O’Connor was brought in to perform, unleashing new energy onto the Beacon sound and helping expand it to unheard places. Which is another notable theme on the album. “I hope this record proves our restlessness and shows that we really aren’t content to have only one approach to creating music,” says Mullarney. “Every part of our process is linked to discovery.” And that meant trying out studio tricks and recording techniques on the fly, getting lost in the process until they came out the other side. Like with “Cure”, Escapements’ frenetic, breakbeat-inspired penultimate track. Mullarney explains: “There’s a moment where I was simply playing chords on the studio Wurlitzer and singing while the mic recorded the room. The idea was to escape the produced electronic music, just for a moment, and capture the energy in the room.”

Beacon have also announced a national US tour. They’ll be joined by Portland rising star Natasha Kmeto. All dates are listed below.

Escapement can be pre-ordered now at The Ghostly Store.