5 months ago
Words by Adam Fink 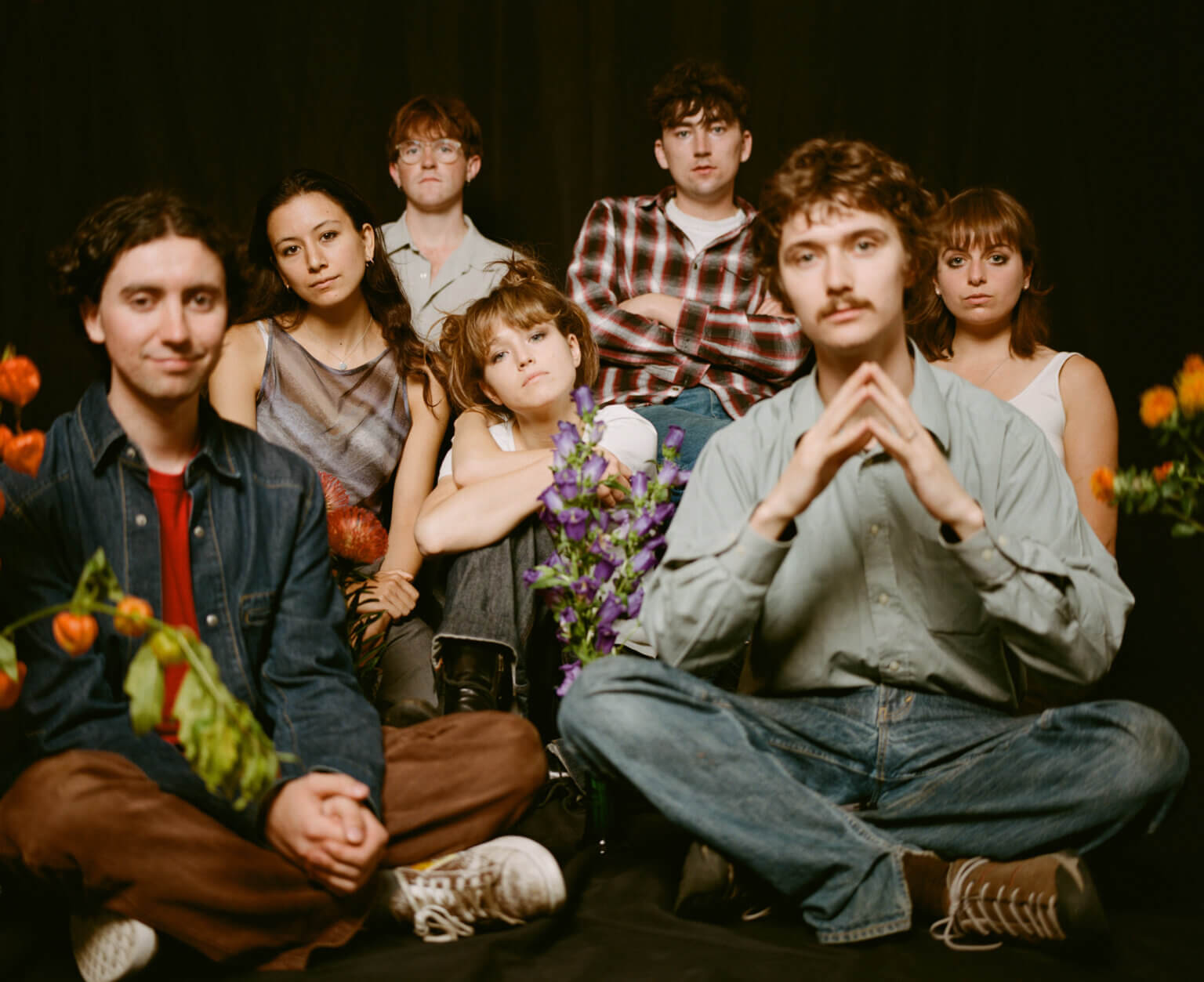 Black Country, New Road interview with Northern Transmissions
Share on TwitterShare on PinterestShare on PocketShare on RedditShare on FacebookShare on Email

Black Country, New Road came out of nowhere last year. The London, UK based septet immediately blew away critics upon the release of their very first singles. The band was even called “the best band in the world” by British online music and pop culture publication The Quietus. Luckily for all of us who were caught up in the hype, when the band dropped their debut album For The First Time on February 5th, 2021, it had the chops to back up that kind of hyperbole. The seven friends that make up the group wowed everyone with their debut’s hyperactive blend of post rock and klezmer music that scored the monotone delivery of frontman Issac Wood. It was fresh and exciting and almost a year to the day the art rock collective are set to release their sophomore album, the less frenzied, more delicate and, honestly, quite lovely Ants From Up There. Black Country, New Road was ultimately thwarted by the pandemic, an ability to tour and promote the album in a traditional sense so with this new release, and their first, almost sold out headlining North American tour on the horizon, it seemed the whole world would finally and rightly hear Black Country, New Road. Two steps forward and one step back, I’m afraid, is how things tend to go these days. Just the other day Wood announced his departure from the group saying that he has been feeling, “feeling sad and afraid…and the kind of sad and afraid feeling that makes it hard to play guitar and sing at the same time.” While this turn of events is truly upsetting, the world has seen too many great artists, venues and so many other important aspects of the music industry crumble under the weight of the last two years, the rest of the band has decided to continue on playing music under the BCNR moniker. It was just prior to the announcement that we caught up with drummer Charlie Wayne and guitar player Luke Mark from their separate homes in London and they spoke of how interesting the last year has been for them all.

“I think when people ask how things have been,” Wayne explains, “that it’s been going super fast at this breakneck pace because we have done these two records in the last year, which we do understand is a big thing that has take a lot of work but it hasn’t really been that crazy because we haven’t been doing the sort of stuff that bands normally do when they release a record, like touring. We just basically haven’t done any of that. So this weird combination of feeling super busy but not really,” Wayne says with a laugh. “On and off, there has been,” says Mark of the band’s situation. “There was a time recently even when bands had been playing full capacity shows but over the last few weeks things have been getting cancelled again all over London but for us, we kind of nixed all our chances to play a show while there were still shows.” Even through the explanations that the pair took to explain how strange a scenario they found themselves in, it is all told with a remarkable sense of humour and kindness towards each other and the situation. In fact, listening to the pair talk, Mark apologizes early on for partaking in a bowl of vegetable soup during the conversation,“I’m on a hot soup cleanse” he jokes, you do get the sense that the members of Black Country, New Road aren’t just band mates but actual friends. It’s wonderfully charming to see and it goes a long way to explain the effortless musical chemistry the band has with each other.

Going from the frenetic For The First Time to the delicate and gorgeous Ants From Up There in only a year, at their young age, is something that the majority of veteran musicians would find an impossible task to accomplish. Considering how different the two albums are, it is surprising to hear that some of the music on both albums were being worked on concurrently. “We had a song like “Basketball Shoes” in the locker since late 2018,” says Wayne, “and there were others like “Good Will Hunting” that we played one time live in like 2020 literally right before the lockdown.” Mark adds, “It was the nicest time for that one. We were all feeling great and it was snowing and it was this magical place that we were playing this show. We were all having a blast and we played “Good Will Hunting” and it sounded so good. People seemed to really like it and then we couldn’t play a show for like 5 months,” He says with a good natured laugh. With seven members in the band, you would imagine it would be hard to have everyone on the same page musically all the time but as Wayne explains the way they come up with these songs is a way that clearly works for them. “It’s this combination of things,” he says. “There is definitely the case where there is a blueprint, which tends to be introduced to the group. Things rarely seem to come out of thin air and we spend a bunch of time jamming it until it becomes a song. Normally we have this idea of what it is going to be and then we will all contribute our own parts to some extent. There’s always a conversation of what will happen but it’s kind of not one or the other but a mix of both. It’s sometimes these little details that make the songs feel like they are finally done.” It’s interesting to hear them describe how the conversation about the song is always a part of the process. “There are these bits that are more set in stone and then these other moments that come up,” says Mark, “that we decide on how we feel about them in the room. It is funny though because it always happens that the moment we tend to record a song and the next time we play it, one of us has this amazing bit that we totally missed getting on the record,” he chuckles.

These happy moments are something that live audiences tend to look forward to when seeing a band like Black Country, New Road, who’s music tends to thrive in a live setting. Fans though do tend to get stuck in the way they’ve heard and experienced their favourite songs and it’s not always the case that they love any unfamiliar flourishes to the live presentation of those songs. “You’d think the live audiences would really appreciate those little flourishes they don’t hear on the record but you’d be really surprised,” he says laughing. “A lot of the time people just want to hear what’s on the record.” “But you never want to play a show that just sounds exactly like the album,” adds Mark, “and much more of the bands on the touring cycles that we are associated with do more improvisation than we like to do regardless.” Well, fans of the band will have some time to savour the beautiful complexity of the new album and hopefully before long we will finally be able to be treated to an actual Black Country, New Road tour. It’s heartbreaking to listen back to the conversation we had and hear the excitement in Wayne and Mark’s voices talking about being able to come play, and even come to, North America for the first time but with a group like this, made up of such good musicians who are actual friends, I feel like it won’t be long till we see them in person again. Until that time, Ants From Up There, should help slightly ease the pain.