“[It has a] monumental drum beat with a hypnotic bassline and a very raw and steady guitar riff. Not to mention the solid bongos breakdown. One of the first pieces we ever did. The jam was good and the tune came to us very quickly, almost identical to the recorded version… minus the bongos, voices, and Streets of Rage noises. It’s meant to be the story of a band who plays a very early gig in a daytime festival.

Everyone in the band is hitting the same nail in a different way. It really brings a lot of energy to the song. It makes you want to dance like you’re in trance or to play percussion with anything you could find in front of you. Haunting vocals and unexpected sounds really add a haunting vibe to the song.”

AXLAUSTADE language of an era

a decade of used illusions and promising riffs

but prefers to imagine things differently

he likes the optimism of various reverbs and birdsongs

AXLAUSTADE towards a silkier new beginning

dozens and dozens of hours jamming in a dark room

AXLAUSTADE forgot some of his alternate tunings

all ears to mysticism and rodeo stories

he dreams of a daytime festival and of something to offer

after an albini rendezvous gone kaput

after the feedback of small amplifiers under a plexiglass of freedom

three boys and a pair of electronic bongos

grunge of the future as a new path

he is now ready to befriend you 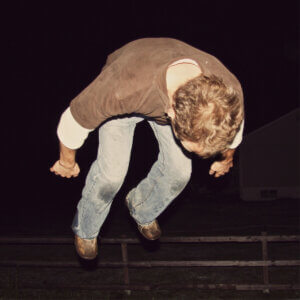