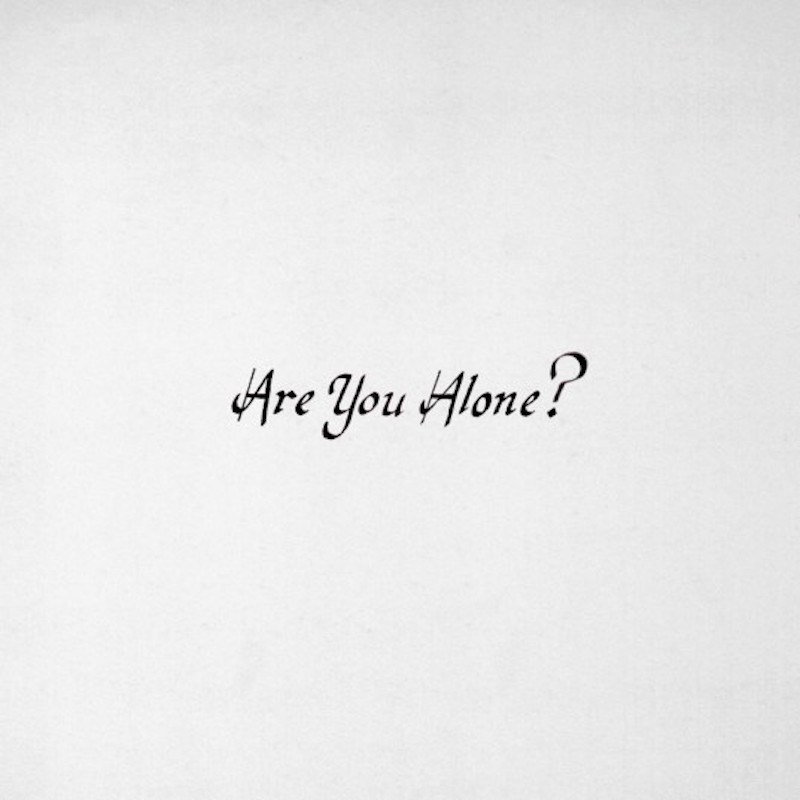 Majical Cloudz frontman Devon Welsh doesn’t mice words. The 12 songs that make up Are You Alone? are unflinchingly direct: the vocals are placed high in the mix — never shrouded by harmonies, double-tracking or reverb — are the lyrics are emotionally naked. The instrumental backing from Matthew Otto is minimal, consisting of soft synth tones and a downtempo beats, and it places the full focus on Welsh’s performance.

In this way, Are You Alone? isn’t a departure from 2013’s breakthrough effort Impersonator, a record that was similarly stark and soul-piercing. On that prior album, Welsh’s words were frequently dark and cryptic — the lyric sheets didn’t reveal much, and the songs took meaning from the gravity with which the singer delivered them. Are You Alone?, on the other hand, is almost entirely about love, exploring both the intensity of feeling and the fear of being vulnerable.

“Silver Car Crash” is a particularly striking ballad. Featuring a lonely synth figure that recalls Boards of Canada, Welsh fantasizes about dying in a car crash with his lover (à la the Smiths’ “There Is a Light That Never Goes Out”) and he declares, “I am always perfect / When I am holding on to you / And I know love is worth it / I am in perfect love with you.” Otto punctuates these thoughts with a distorted cacophony of angelic choral effects, reinforcing both the beauty and the terrifying magnitude of this kind of love. With its flowery fantasies and unabashedly saccharine sweetness, it’s a bit like a spiritual successor to the Magnetic Fields’ “The Book of Love.”

This degree of forthright emotion can be cloying, and Majical Cloudz don’t shy away from what might be perceived as corniness. This is true of both the lyrics and the melodies: Are You Alone? is a more pop-friendly record than Impersonator, and while there’s nothing here that’s remotely slick enough for mainstream radio, songs like the tumbling electro-swing of “Are You Alone?” and the airy “Downtown” have full-blown chorus hooks, and it’s not hard to imagine an industrious producer speeding up the tempos and remixing them to become cathartic dance floor bangers.

Mostly, Are You Alone?’s uninhibited approach to the matters of the heart is a good thing, and it’s admirable to hear Welsh cast dignity aside and mull over his feelings so nakedly. There are also times that Majical Cloudz venture too far into schlock: “So Blue” features a cheeseball refrain in which Welsh stretches for a higher register when crooning the title phrase, and “If You’re Lonely” recycles subject matter already explored more eloquently on other tracks. On the latter tune, the frontman sings, “You don’t have to be all alone / No one has to be that way / No one has to be afraid of being loved.” This is the eighth song on the album, and by then, we get the point already.

It can be faintly embarrassing to hear Welsh sing about relationships with such wide-eyed wonder — as if, after so many years of human existence, he can possibly have anything new to bring to the conversation. Still, that’s love though: it’s overwhelming, rarely dignified, and people still need pop songs to help them make sense of it.