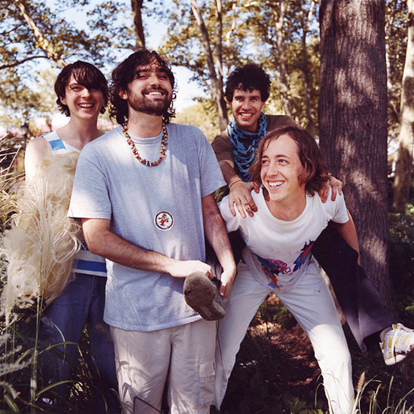 Animal Collective have unveiled three new live videos preceding their North American tour, which starts later this week. The videos, a collaboration with The Creators Project, feature live performances from the band’s December 2012 Terminal 5 shows complete with psychedelic visual effects and overlays by Abby Portner. Watch above. The videos provide an in-depth look at Animal Collective’s live performance as the band prepares to head back out on the road this spring with labelmate Dan Deacon. Animal Collective will be returning to the UK for a performance at Field Day on the 25th of May 2013.

The band and The Creators Project have also relaunched Animal Collective Radio, which last autumn counted down to the release of Centipede Hz. The weekly radio shows featured different band members and guests playing mixes, while exploring the creative influences of Centipede Hz. The final live installment premiered the entire album with custom visuals for each track created by Abby. These videos are now available again in full for the first time since the launch at radio.myanimalhome.net.

Abby, who dubs herself the “visual person” for Animal Collective, designed the Animal Collective Radio site and visuals with band’s stage production and live performances in mind. Both the site and stage production feature a giant mouth and Centipede Hz album visuals. You can experience the fully realized prismatic audiovisual experience come full circle for yourself with the release of the three live videos and the relaunch of the Centipede Hz Radio albums visuals.