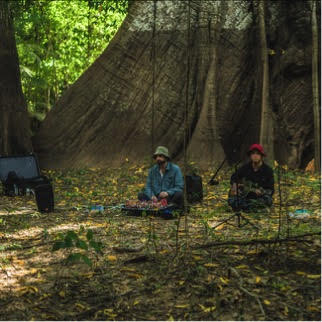 Animal Collective have announced a new limited 12” Meeting Of The Waters, available on April 22, 2017 (Record Store Day 2017). Recorded live in the Amazon rainforest outside Manaus, Brazil in early 2016, it features performances by Animal Collective’s Avey Tare and Geologist. Excerpts of the music will be featured in an episode of the forthcoming Viceland series “Earth Works” set to air on June 2, 2017.

The EP is made up of original tracks and field recordings and runs over 30 minutes in length. A portion of proceeds from this release will go to benefit Idesam (Instituto de Conservação e Desenvolvimento Sustentável do Amazonas), a non-profit NGO that works towards the conservation and sustainable development of the Amazon region.

Meeting Of The Waters follows on from the recent release of The Painters EP, a new companion 4-track release to the band’s 2016 album Painting With. The EP is out now on CD and digitally, and available as a 12” on May 5, 2017.

The band have also announced a new series of headlining and festival dates, including appearances at Moog Fest, 1D10T Festival, and two shows with Fleet Foxes.

* with Circuit des Yeux
^ with Fleet Foxes
+ with Eyvind Kang

Tune into Play It As It Lathes with Zach Cowie on NTS radio April 21st to listen to track “Man Of Oil” ahead of its Saturday release. Watch/embed the trailer for the upcoming Viceland “Earth Works” episode here: https://www.facebook.com/anmlcollective/videos/10154207042796021/