Just off a tour supporting Mac DeMarco and in the midst of a run with Thee Silver Mt. Zion, Damon McMahon’s Amen Dunes offers an entirely different vibe present on forthcoming album, Love, with new song ‘I Can’t Dig It.’ This follows previously shared tracks, ‘Lonely Richard’ and ‘Lilac In Hand’ from the forthcoming LP out May 12th via Sacred Bones.

“Black sheep living, celebrating the goodness of being no good.
Failing at coping, loving, etc. – lazy beneath the banyan and doing just fine.
We suffocate when dreaming and wash away when we rise, bye bye loving, there’s no use in trying.
The songs about loving the sh*t out of all the above.
Glory days for the poor son.”
— Damon McMahon

Amen Dunes, the project of New York-based Damon McMahon, third full-length album ‘Love’, which comes out on May 12th via Sacred Bones.  Amen Dunes has always been rooted in traditional song and sound, but ‘Love’ is his first work in which this so clearly shines through. The guiding influence of Astral Weeks, Sam Cooke, Tim Hardin, Marvin Gaye, Hector Lavoe, and the cosmic non-verbal mediations of Leon Thomas, all kept vigil over the songwriting of Love, and the spirit of late 60’s/early 70’s spiritual jazz of Pharaoh Sanders and Alice Coltrane channeled the sound.

Amen Dunes was born out of a collection of songs made in the autumn of 2006 in upstate New York. They were originally personal recordings not intended for release, but after moving to China for a while, the tapes were released in New York. 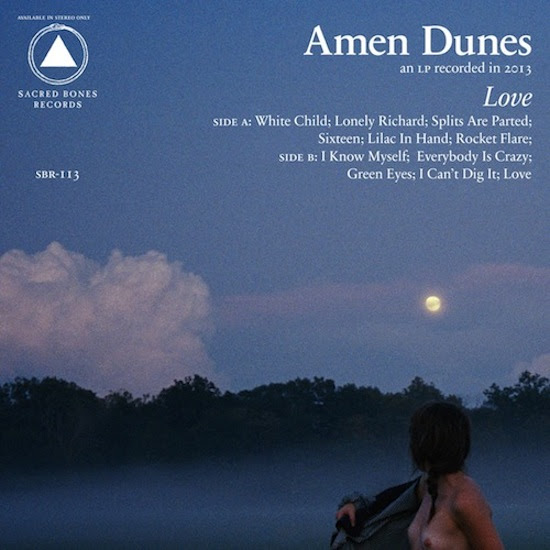