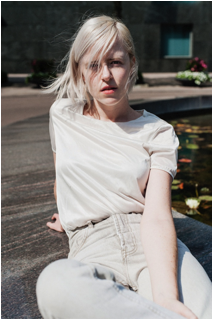 Following the release of standout tracks “Turning Light”, “Right Now” and “Fading Lines”, Amber Arcades—the moniker of Dutch musician Annelotte de Graaf—is thrilled to share the breathtaking video for “Fading Lines” via NOWNESS. The track is from her upcoming debut album, Fading Lines (out June 3rd on Heavenly Recordings.The breezy cut proves a rousing mix of dreamy guitars and de Graaf’s feather-light vocals, propelling the listener through her addictive and delirious reverie. The video- directed by Gover Meit- takes this sentiment to literal form, following the gorgeous aerial ballet of a skydiver shot in reverse.

Annelotte reflects on the video: “The song is loosely inspired by my grandfather’s death a while ago and the way he was able to accept everything his life had and hadn’t been. It’s about the feeling of being in an overwhelmed state, like you’ve been propelled free-fall into something you don’t understand for the most part, lines between memories and moments fading until it all turns into a gloriously incandescent blur. When Gover told me about his idea of recording a person dancing mid air, slowly falling up into the sky, I felt like this was the best possible way to translate this overwhelmed feeling into moving images. I never could’ve imagined it would turn out this beautiful though.”

Right from woozy, soaring opener “Come With Me”, the album invites endless interpretations – or simply emotional and physical reactions of joy, loss, acceptance and “the billions of different views there are to this life and whatever we’re doing here”. The result is a dazzling and immersive collection of songs, proving Amber Arcades as an assured and exceptional new talent.