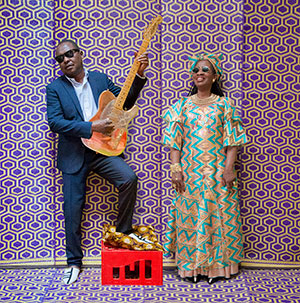 Malian musical duo Amadou & Mariam will release their Bofou Safou EP June 9 on Because Music. In addition to the title track, the group has also recently previewed the EP with the song’s Henrik Schwarz Remix. The term “bofou safou” is a Bambara (the Malian national language) nickname given to nonchalant young men who would rather dance than work.

Of the forthcoming EP, the group notes, “We really like the remixes that were made for the EP. You get to hear our music in a different form, which is great. All five remixes manage to catch the essence of our song while really pushing those enticing afro pop and electronic vibes further.”

Hailing from Mali, Amadou Bagayoko and Mariam Doumbia first met as children at Mali’s Institute for the Young Blind—both lost their vision at an early age. It was here that they started performing in the institute’s Eclipse Orchestra, eventually marrying and began recording together in the ‘80s.