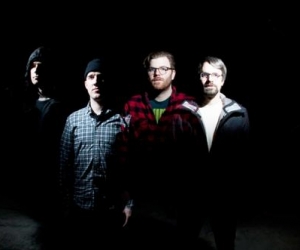 Today, All Tiny Creatures is announcing the release of the All Die Out Mixtape, the next illumination in the series of expanded audio accompaniments to their second album, Dark Clock. Like The Book and A Lone Sound before it, the new All Tiny Creatures mixtape takes an album single and asks the question: what if you could hear this song’s past, present, and future all at once?

All Die Out is the answer, a twenty-two minute exploration that includes a remix by Dosh and contributions from longtime collaborator Aquarelle. The All Tiny Creatures mixtape tradition has become an indispensable commentary track for their albums.

“‘Dude, look what I just got. It started with a text. All Tiny Creatures’ founder Thomas Wincek was at work on the new album. He’d just found a Rockman, the headphone amplifier designed by Boston founder Tom Scholz. Basically a guitar DI Box with multiple effects built in, this is what Def Leppard used all over Hysteria. I had no idea. For those vast radio jams of my youth, my brain had been the effects processor. You hear a sound and you make a decision about where it comes from. When I started listening to All Tiny Creatures, it was always a multiple choice question — and the answer was somewhere between a machine and a memory.

A couple months later, I was listening to Drexciya and watching King Crimson live videos. I was hearing Beach Boys songs I never knew existed. Wincek was curating my lunch breaks, and, simultaneously, scattering the breadcrumbs so I could find my way forward. Like leaving a note for yourself before you time travel, I was learning the secrets of Dark Clock. All Tiny Creatures’ second album is an ode to the intertwined bodies of music and technology. A familiar, primordial ease is wrapped up in pulsing electricity. In ten songs, the Wisconsin-based four-piece reminds us that our blood-filled frames are responsible for making the tangle of wires around us. We’re still inventing fire.

All Die Out Mixtape Tracklisting /

Since the release of Dark Clock this summer, All Tiny Creatures’ Thomas Wincek, Andrew Ftzpatrick, and Matthew Skemp have been tending the fires of their parallel pursuit, Volcano Choir, who released their second album, Repave, last month. To accompany the unfolding story of the Volcano Choir family tree – which includes Bon Iver, Collections of Colonies of Bees, the Altos, and Jon Mueller – Jagjaguwar released the Comrade Remix EP, featuring an out-of-this-world remix of “Comrade” by All Tiny Creatures. It takes the Volcano Choir single to new heights and offers listeners a window into where Dark Clock and Repave converge.