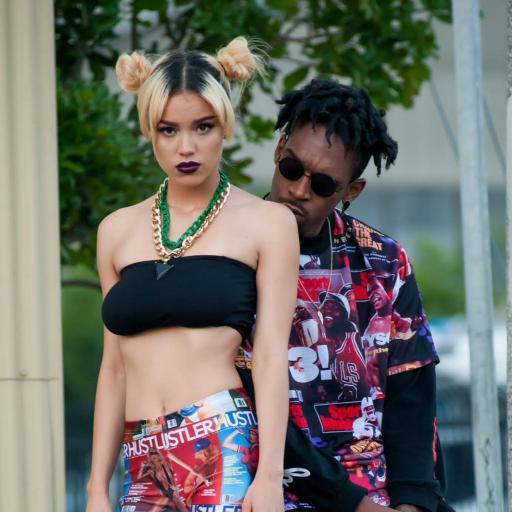 Today, All Hail Noir share their “Afraid 2 Die” (TOSKA REMIX VIDEO). All Hail Noir is a collaboration between Myagi and Indigo Ford. The two crossed paths in 2012 in their hometown of San Bernardino, California at the Shui Cafe studio.

Both Myagi and Indigo were students of the game at a young age. Myagi began rapping and writing poetry in middle school, and went on to form his own group, “Cash And Fashion Everyday” AKA CAFÉ Family. Most recently under the name “Black Brad,” Myagi collaborated with Stockholm based producer, Mem2001 as “WXLVES” releasing a track entitled, “Suicide Theme for Alaska Young” featuring Little Pain.

Their musical inspiration was shaped and cut from the same fabric of hip-hop legends such as Timbaland, Missy Elliot, Prince, and Outkast. With the classic influence from these artists, All Hail Noir added their own twist to the hip-hop sound, mixing in the sub-genre “goth trap.” The style was formed when Indigo suggested Myagi start sampling less conventional hip-hop sounds and loop in old opera and rock ‘n’ roll songs on top of the gritty bass.

In 2012, the pair released their debut mixtape, “Lady and The Tramp” which was an ode to their newly found partnership in music. Fueled by songs such as “B4,” “White Trina,” and “Welcome To Gotham” the self-proclaimed “Vamp Lords” were beginning to stir up a bloody domain in the hip-hop world. Following this release, All Hail Noir released their second mixtape “MOON” in 2013.

Both releases were written, produced, and performed by Myagi and Indigo. This allowed them to introduce their distinctive sound. The duo describes their music as a healthy blend of mysterious ethereal synths with a mash up of hard-hitting trap inspired backbone.