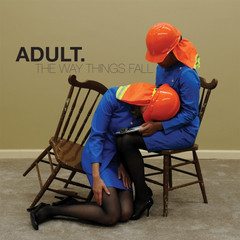 ADULT. have just released a new video for their song “Tonight We Fall”. This new video was created entirely by ADULT. members Nicola Kuperus and Adam Lee Miller in their Detroit home. The concept was inspired by a series of photographs Kuperus had done a few years back that she had created after seeing Jean Cocteau’s “Blood of the Poet.” Like most of Kuperus’ work, the video has no post production and all effects were created “in camera.”

The duo have also just announced new tour dates, including a performance at this year’s Treasure Island Music Festival, and released a remix of “Tonight We Fall” by John Foxx & The Maths. Check out the remix below with all of the upcoming tour dates.

* with Flaamingos
^ with Soft Metals