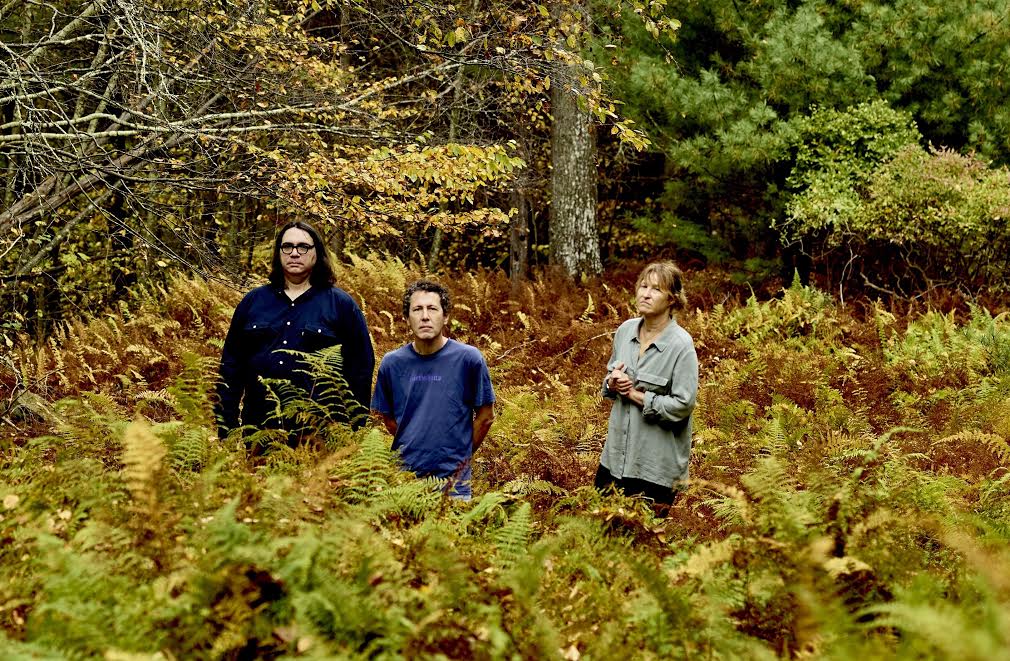 Yo La Tengo have released a second song from their forthcoming EP, Sleepless Night, “Bleeding” is the record’s standalone original. The five-song record also features covers of songs by The Byrds, The Delmore Brothers, Bob Dylan, Ronnie Lane, and The Flying Machine. The tracks on Sleepless Night were initially released as one side of an LP included within a limited- edition catalogue (published by LACMA and DelMonico Books/Prestel) for the  LACMA exhibition, Yoshitomo Nara , the first international retrospective for the Japanese artist Yoshitomo Nara (b. 1959). A longtime YLT fan, Nara worked in collaboration with the group — Georgia Hubley, Ira Kaplan, and James McNew — to choose the EP’s songs.

We met Yoshitomo Nara in 2003, would see him at his art shows and our concerts. We dj’d at an opening at the Asia Society, and on another occasion he drew a picture of Georgia strangling me on a Gloomy pencil case that became one of Georgia’s prized possessions until it was stolen from her at the bar at the K-West hotel in Shepherd’s Bush. To make the catalogue of his 2020 exhibit at LACMA more personal, the idea came up to include an LP of some of Nara’s favorite songs as part of a deluxe edition. We were asked to provide one side of the LP (and that one track be a new composition), with the other side being another six songs selected by Nara, in their original versions. Here are the six songs we contributed to the LACMA record, chosen in collaboration with Nara.

I probably was introduced to “Blues Stay Away from Me” on NRBQ’s Workshop lp, working backwards to the Louvin Brothers and the Delmore Brothers (with a detour to Doug Sahm and Band). Our version was recorded by Mark Nevers in February 2011. Charlie Louvin had died just a couple of days before. We were on a tour with William Tyler that came to an end in Nashville. The three of us and William and Kurt Wagner threw together an arrangement of “Blues Stay Away from Me” as a tribute and closed our show at the Exit/In with it. Since we were hanging around Nashville for a few days before going home, we went to Mark’s studio and recorded it.  “Wasn’t Born to Follow” was recorded by Gene Holder as part of the sessions that resulted in Stuff Like That There. Dave Schramm on lead guitar. I’m sure I heard the Byrds’ song for the first time when my mom took me and a bunch of my friends to see Easy Rider. (One kid was forbidden by his parents from joining us, as was my younger brother. My dad took my brother to see Butch Cassidy instead, and I’m guessing my friend stayed home and did homework.)

Ronnie Lane didn’t write “Roll On Babe,” but his is the version we’re covering. James recorded it in Hoboken. (And that song was among the songs Georgia played when we dj’d at the Asia Society.) While making And Then Nothing Turned Itself Inside-Out in Nashville, Roger Moutenot recorded Dylan’s “It Takes a Lot to Laugh, It Takes a Train to Cry” for a John Peel birthday show. As best as we can tell, we sent the one and only copy of the master to England. Yes, we’re as dumbfounded as you are, if not more so. After a lot of sleuthing, we came up with this.

“Bleeding” was written by us, recorded in Hoboken by James.

James also recorded The Flying Machine’s “Smile a Little Smile for Me” for Michael Shelley’s Super Hit Tsunami!, available to people who pledged to WFMU’s 2019 fundraising marathon. Just weeks ago, Yo La Tengo released  We Have Amnesia Sometimes  — a collection of five instrumental compositions that the group recorded in the spring during socially distanced sessions at their rehearsal space in Hoboken, NJ. Out now digitally, a vinyl edition will be available at a later date via Egon and can be pre-ordered HERE.