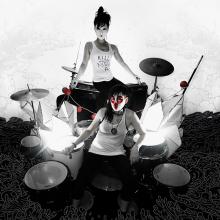 YAMANTAKA // SONIC TITAN have unleashed their new video for the song “One” which is the first track from their forthcoming album UZU out October 29th on Suicide Squeeze in the US and Paper Bag in Canada.

The band have also just announced their first set of North American dates for 2013 (with more to be announced very soon) including a very special performance on Halloween at the Basillica in Upstate New York. YAMANTAKA // SONIC TITAN will also be playing this year’s CMJ festival with their full schedule to be unveiled soon.

With their sophomore effort UZU, Alaska and Ruby continue their exploration of cultural dualities. While YAMANTAKA // SONIC TITAN has always provided an outlet for the core duo’s celebration of their Asian heritage, the inclusion of auxiliary musicians and artists into the fold has reinforced one of the most crucial defining dualities of the group: the merging of diasporic and indigenous perspectives. This meeting of East and West is perhaps most visible in UZU’s lead single “One”. As the first YAMANTAKA // SONIC TITAN song to extend the songwriting credits beyond the core duo, “One” incorporates the indigenous upbringings of the extended group by leading off with a traditional Iroquois song. The introductory chant is a social song calling all people together, and is performed by people of the Mohawk tribe. From there, the band kicks into a driving guitar line and a vocal hook as sweet as any J-pop hit. Metal riffing, free-jazz cacophony, and meditative Eastern percussion patterns accentuate the song. In the hands of lesser visionaries, this kind of cross-pollination would sound like a schizophrenic genre mash-up. But YAMANTAKA // SONIC TITAN’s appropriations never sound forced. Rather, it sounds like a celebration of the cultural collision of Alaska and Ruby’s upbringing. The hybridization is evident throughout UZU–you can hear it in the operatic piano-and-vocal opener “Atalanta” segueing into the dynamic prog of “Whalesong”, the Eastern melodies seamlessly melding into the synth arpeggio and guitar dirge of “Windflower”, the musical storytelling tradition of “Seasickness Pt. 1” juxtaposing with the Heart-like classic rock gallop of “Seasickness Pt. 2”, and the closing choir passage of “Saturn’s Return” descending into Merzbow-esque white noise.