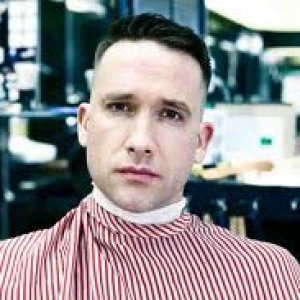 Xiu Xiu is ready to reveal their latest full-length album Angel Guts: Red Classroom, out February 4th on Polyvinyl in North America and Bella Union in Europe. The record is Xiu Xiu’s first album of original material since 2012’s Always. Listen to the first single “Stupid in the Dark” above. The album comes on the heels of NINA, Xiu Xiu’s collection of Nina Simone covers set for release Dec. 2nd on Graveface Records.

Angel Guts: Red Classroom is the beginning of Xiu Xiu’s descent from grayness into the deepest blackness endurable. It is the sound of Xiu Xiu’s death.

This is a bold proposition, even for a band that has never so much pushed the envelope as pulled it (forcefully) away from the line other musicians are willing to toe. And now, in what is unquestionably their darkest hour, Xiu Xiu have lit the envelope on fire and are using it as a torch to light the path ahead.

Having spent the previous four years living in North Carolina, primary songwriter Jamie Stewart relocated to Los Angeles, moving blindly into a neighborhood whose notoriously dangerous reputation was unknown to him.

A park divided among four gangs, a lake routinely dragged for bodies, a building wherein two infant skeletons were recently uncovered — the aura of his new home bleeds into every pore of the album, each lyric and note bearing traces of its essence: the terrible beauty, the despair, the violence, the ultra humanity, the uncertainty.

“I know to a degree I must have romanticized it,” Stewart admits, “But when it’s not safe to go out at night, what else can one?”

“Your face is down alone / On your desk / At the end of the city / You were squashed into / There is no one you love.” So begins the first verse of the album.

In the wrong hands, such topics could be rendered as far-fetched fantasies. But Stewart’s evocative vocals lend his provocative lyrics the balance they need, grounding them in a stark realism that forces us to acknowledge their existence, even confront them (as discomforting as that is).

Unsettling, too, is the music. Working with only analog synths, drum set, and 1970’s analog drum machines, Xiu Xiu has never before sounded so focused, so captivating, so intent on delivering a kick to the throat.

Though influences can be cited (Suicide, Kraftwerk, Nico, Einstürzende Neubauten), they are ultimately far less relevant than the mark this album will leave on other musicians and music fans from this point forward.

Take the record’s first single “Stupid in the Dark” (listen here) — its tone ominous and pulsing, its harmonies simple and direct, its grip unrelenting. Or “Botanica de Los Angeles,” a sparse, yet undeniably anthemic merging of bruising drums and bone-rattling bass synths.

Unbearably dark, yet incredibly illuminating, with Angel Guts: Red Classroom Xiu Xiu continues to forge (and at times risk) its reputation as avant-garde pioneers. It is the work of a band unraveling to its core and exposing the boldness within.

Xiu Xiu may be dead, but its will is more alive than ever.

3. Stupid in the Dark