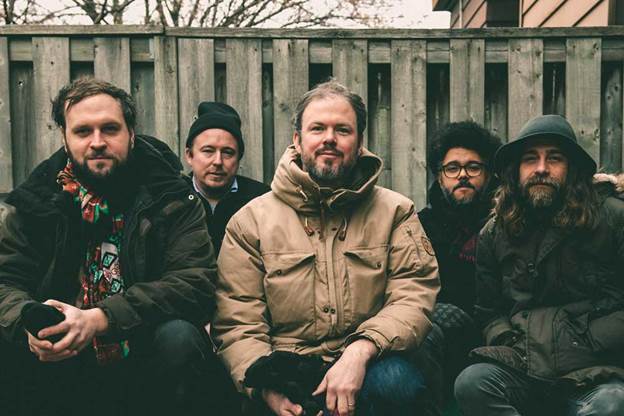 Wintersleep have shared their new video for “Forest Fire”, It is the latest single lifted from the band’s current release, In the Land Of. The director, Christopher Mills, explained the video:

“We wanted ‘Forest Fire’ to be a stage play on a grand scale, in which Mother Nature conquers over all. This was a fun video to make. Members of the band sent video performances over iPhones – I mapped and built these into ‘puppet faces’ on the houses, with the aim of giving each house its own personality, as our ‘hero house’ gently serenades his neighbor, soothing her with love throughout a series of catastrophic events. A theatric narrative of random events occurring over time, culminate in a fiery conclusion, vying for an operatic and dark undertone. There’s a sort of ‘digital veneer’ that some might find mildly abrasive – while others might see this as ‘painterly’. Either way, what’s for sure is that the pianos are lightning, the guitar solo is definitely fire, and the bass guitar is the ocean that holds it all in.”

“The average Canadian carries around with them in their head a vision of spaciousness,” so theorized Canadian composer R. Murray Schafer, describing a so-called ‘Canadian sound.’ For Schafer and many others, it was a sound defined by space, by the land and our distance from and proximity to it. For Harry Freedman, it was “gaunt” and “lonely.” Elaine Keillor called it “immense, empty, mysterious, harsh, indifferent, producing a response of awe mingled with terror and an intense sense of spiritual loneliness.”

In the Land Of encourages thought and introspection. The new record’s title is an incomplete thought, a blank that is filled in across the record with different places, words, and sounds. “A lot of the songs touch on this idea of being a stranger or feeling foreign in all the different landscapes in which the songs took place lyrically,” explains vocalist and guitarist Paul Murphy. “It all relates back to the land,” adds guitarist Tim D’Eon.