What The Festival Review 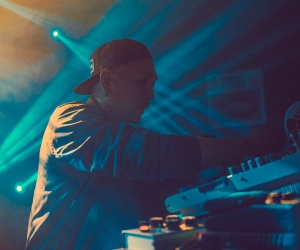 Nestled on top of a plateau surrounded by 360-degree views of the Columbia River Gorge to the north and Mt. Hood to the south, this year’s What The Festival transformed into an even more powerful experience than last year’s inaugural installment, and that’s saying something. While the windstorms ripped over the plateau leaving everyone covered in a layer of dust, the bass emanated with determination from the Funktion-One sound systems adorning every stage.

From the daily splash pool parties in the dry central Oregon heat to the cyclical gusts of dust, festivalgoers braved the elements this past weekend and were rewarded for their tenacity by a never-ending supply of performances from the talent roster.

While What The Festival is surely more than just a music festival — it’s a cultural experience in its own right — it was the music that set the tone for the weekend. Here are some of the stand out performances from this year’s line up.

As one of the stalwarts of the Pretty Lights Music label, Gramatik embodies an essence of incredible live performance that is both moving and entertaining. The duo from New York, featuring a live guitarist, crushed their late Saturday night set at the main stage. Over the course of their set, the group meandered through hip hop beats, glitch hop and even gave the crowd a taste of their most recent project, Grizmatik. And with the Funktion-One sound system firing on all cylinders, Gramatik left us with our ears ringing.

While electronic music as a whole was the main draw of the festival in terms of music, the most represented styles were definitely the more bass oriented. On Saturday evening, Russ Liquid put down one of the most moving and progressive sets of the weekend with his own brand of future-oriented bass music. While it’s still an underrepresented style, the future bass movement was in full effect at What The Festival with Russ Liquid — trumpet in hand — no doubt leading the charge. Russ flat out made people dance like animals as the sunset dust storms whipped through the gathered crowd.

Hailing from Berkeley, California, Thriftworks took to the stage Sunday evening with one intention: to melt some brains. His brand of dripping future beats and brash psychedelic melodies and samples stirred up quite the gathering as the sun set over Central Oregon. Through the first half of the set, Thriftworks drifted through more reserved bass tones and introspective sounds, but as night fell, his tracks grew with tenacity and outright psychedelic energy. Thriftworks is an outright experimenter and it shows in his productions and performance. He’s changing the face of bass music and for that he deserves some major respect.

Coming all the way from Tokyo, Japan, Goth-Trad, dubbed as the Far East Assassin, arrived to the stage Friday night for a late 3 a.m. set at the Effin stage. And while it may have been too late in the night for most people, Goth-Trad threw down one of the darkest sets of the night with a seemingly endless supply of pulsating bass rhythms that entranced the Friday night survivors. And with only a single bow at the end of his set, Goth-Trad disappeared leaving the crowd screaming for more.

Sunday night saw the arrival of the Dirtybird Records crew. And of course, Worthy and Claude Von Stroke put down fantastic sets, but the one that really stuck out was J.Phlip. From the very first track to her last, her track selection was flawless. She broke all the rules with ghetto house breakdowns and straight techno jams. J.Phlip took the festival to the next level and made sure that there was no letting up until it was truly time to go home. By the time J.Phlip was finishing up her hour-long set, a massive crowd had gathered and at this point the dust was barely bearable. But the bass kept coming and the people kept on dancing, it was survival of the fittest with house music as the never-ending soundtrack.

What The Festival was filled with music, memories, art and community. It was truly a transformational experience, one that should be enjoyed by every one. It’s a spectacle and the opportunity to be part of that spectacle is second to none. If you had the chance to attend this year, you know. If not, you will have to see for yourself next year.