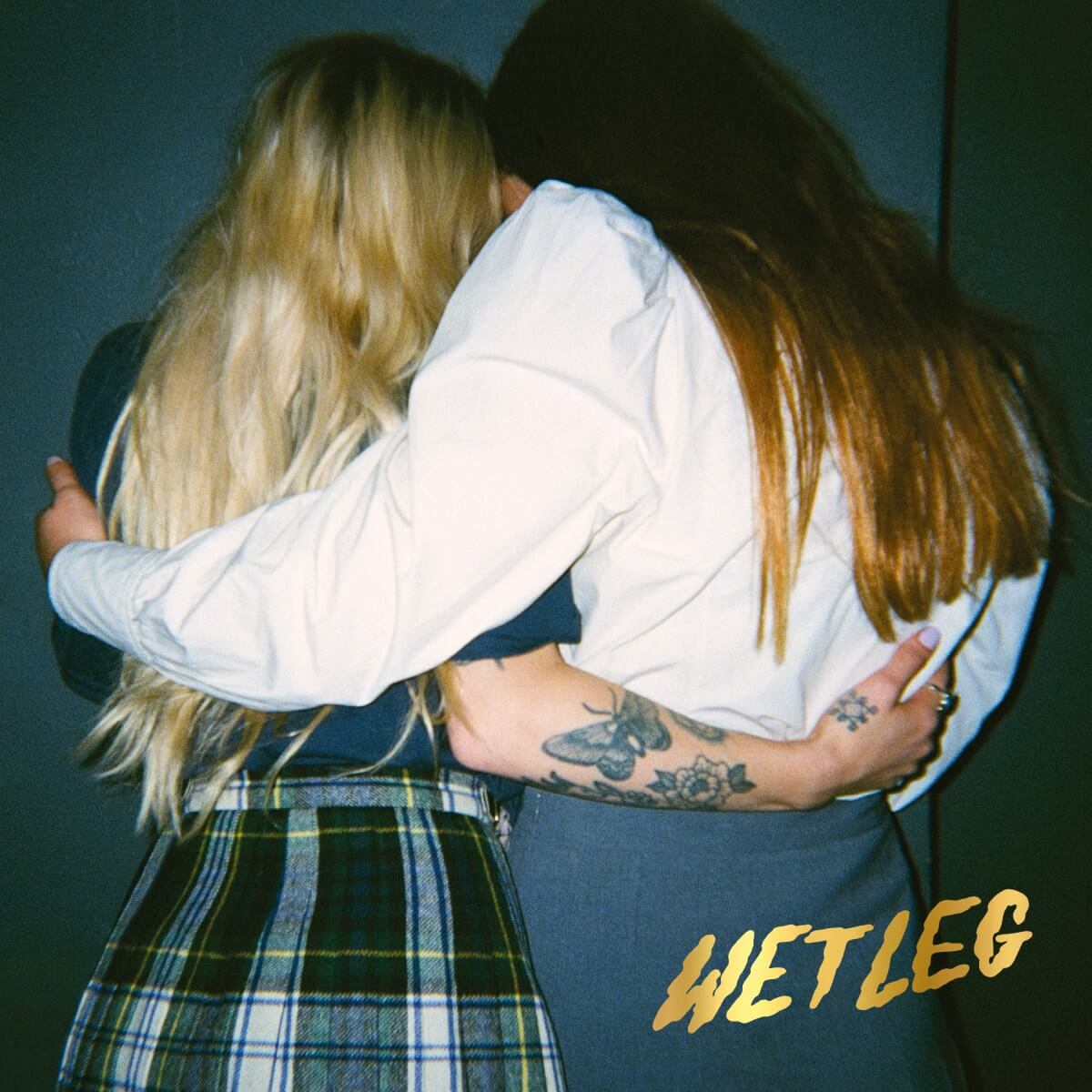 Remember when we heard bands before we heard about bands? An unfortunate consequence of the internet/streaming is the loss of “who is this???” moments of knob fiddling or MTV marathoning. That’s not to say that music then was inherently better or that the joy of discovery no longer exists. But it’s been dampened by various factions like overzealous PR cycles and stan culture. By the time I’ve gotten around to hearing some artists for the first time, I’m already sick of them, through no fault of their own.

Wet Leg is one of those bands. I had heard them mentioned a handful of times over the past few months, surely while scrolling through seas of equally cryptic tweets about Twitch streamers and pro wrestling. I knew nothing about who they were, what they sounded like, or even where they were from. I just knew that they were the Next Big Thing. At least, until the next one comes along.

While many of the reactions I had seen were dismissive, labeling the band as derivative, I didn’t realize just how intense the backlash was until just now, when I searched “wet leg industry plants” on Twitter and got so many results that I stopped scrolling after the first 25 or so. There’s a variety of opinions, and the band itself has even cheekily chimed in. But, for the time being, Wet Leg are tethered to the term “industry plant.”

It’s a phrase that’s growing more ubiquitous by the year and which often says more about the person leveling the accusations than the artist in question. “Industry plant” means whatever you want it to, but, generally speaking, it’s attached to artists who seemingly got “too big too fast,” who seemingly didn’t go through the assumed trials and tribulations of playing to no one before playing the Ed Sullivan Theater. Not coincidentally, they are often women.

Wet Leg just so happens to be two women: Rhian Teasdale and Hester Chambers, from England’s Isle of Wight. In short, they met in college, started a band, and dropped out together. Things worked out in their favor, and they signed to Domino Records in the amount of time it takes some bands to string together a demo cassette. I have absolutely no idea what the precise chain of events are that made Wet Leg the biggest new star in indie, for better or for worse.

But listening to their self-titled debut is effectively spoiled from the start, because, thanks to the Wrath of Discourse, I have preconceived notions that likely wouldn’t be there if I had, say, heard the chorus of “Chaise Lounge” for the first time on FM radio. I’m now expected to determine if Wet Leg are saviors of some kind or just another flagrant indication that the music industry is not, in fact, a meritocracy. (Goodness!)

Not to be a centrist about it, but Wet Leg are neither. They are a decent-enough band in a sea of other decent-enough bands who just so happened to leapfrog them in terms of exposure. I could see them just as easily becoming mainstays through building their connections and developing their sound or also-rans who used up all of their ideas on their first record. If nothing else, they exist, and they have an album out this week.

It’s not difficult to see what it is that draws people to Wet Leg. They merge the deadpan of post-punk with the coyness of indie-pop with the brashness of 90s alt-rock. They have lyrics that stick in your head. Not all of this is done well, mind you. (One of those lyrics is “You’re so woke, Diet Coke.”) But for a band that couldn’t exist without the direct influence of countless other bands, Wet Leg do a pretty good job of sounding like themselves. At times, that means “All Tomorrow’s Parties” with a “Be My Baby” drum beat and Siamese Dream guitar (“Angelica”), at other times, it means “After Hours” glitched up and filtered through “Soak Up the Sun.” (“Piece of Shit”)

Those direct comparisons, of course, come with the question of “Why listen to Wet Leg when those songs/artists exist?” While I would likely never prioritize Wet Leg over the Velvet Underground or (classic) Smashing Pumpkins, I can recognize they write some decent songs with an energy and accessibility that sets them apart from some of their contemporaries. Teasdale’s staid vocals over steady bass and drum progressions might remind you of Dry Cleaning, but they tend to be a prelude to a sudden payoff of explosive energy. For a moment, I thought Wet Leg had found their equivalent of “I’ve been thinking about eating that hot dog for hours” with “Would you like us to assign someone to butter your muffin?” on “Chaise Lounge,” only to be reminded that it was, in fact, a line from Mean Girls. Again, Wet Leg are nothing without their influences.

Their messaging is also on point, in that they know exactly what they want to say and to whom they want to say it. When an album starts with “I feel so uninspired. I feel like giving up,” you don’t need to consult Genius for further analysis. Wet Leg are another band writing about social media, self-care, and general malaise. But their lyricism tends to either be completely forgettable or memorable for the wrong reasons (“I don’t wanna follow you on the ‘gram/I don’t wanna listen to your band”). A track like “Loving You” falters because it’s both musically uninteresting and provides no insight as to what this relationship was. Remarkably, the next song, “Ur Mum” is basically a better version. Hot Topic-core title aside, it shows how much better they are at brash attitudes, giving otherwise-clichéd lines like “I don’t want you to want me. I need you to forgive me” more life. And if there’s any surefire reason to try and catch Wet Leg live, it’s being able to hear Teasdale’s scream.

When interviewed for Vivien Goldman’s feminist music history, “Revenge of the She-Punks,” Bush Tetras guitarist Pat Place remarked that a band like theirs, scraping by in the Lower East Side but still becoming underground sensations, “couldn’t happen now.” It reads not as a dismissal but as an acknowledgment of just how things like loss of regionalism affect genres rooted in community, like punk and, eventually, post-punk. The origins of Bush Tetras and Wet Leg are quite similar: friends drop out of school and start a band and explode overnight. For Bush Tetras, that meant opening for the Feelies and DNA. For Wet Leg, it’s TikTok fame. Any path to exposure is legitimate, and CBGB as it was ever known it isn’t coming back. But while Wet Leg could write a song that sounds like “Too Many Creeps,” it would likely suffer from being more concerned with approximation of sound (whether conscious or not) than with making a statement.

And while “Too Many Creeps” is hardly any more impressive in terms of lyricism and musicality than anything on Wet Leg, its succinct addressing of the male gaze when such a term was far less ubiquitous still feels dangerous and exciting. The unfortunate thing about genres built on rebellion and defiance is that those traits are so easily rendered meaningless over time. And attempts to recreate those attitudes – even just in terms of pure energy – can feel hollow when you can see where they’re tracing from. I don’t know what Wet Leg’s exact ambitions are, but while these songs are certainly energetic, they’re not all that urgent, either politically or even sonically. A track like “Convincing” is hurt by a structure that alternates between slow and fast tempos instead of building momentum piece-by-piece. And it’s not clear what drives them beyond liking other bands and making music together. The best thing I can say about them is that they have good taste and, for the most part, know how to deploy it.

It’s hard to review albums like this, especially when there’s self-imposed pressure to Find Meaning. I don’t mind Wet Leg. If I saw them on a festival lineup, I would consider seeing them. I might not listen to this album in full ever again, but the right (or wrong) circumstances might call for “Ur Mum.” I barely know where they came from, and I have no idea where they’ll go. The same goes for the larger discussion about them. For now, Wet Leg are a decent-enough band with a decent-enough debut, but there’s not much particularly exciting about them. Hopefully, with their next album, there’ll be more to say about their music.